Once every couple of months, I throw a film into my old Canon EOS5 (the Plastic Fantastic) and follow my daughter around for the day, shooting the stuff she gets up to. I’ll then print out the best frames of the roll and add them to a shoe box that contains pictures telling the story of her life so far. One day, when she’s old enough to be embarrassed by it, I’ll give her the box.

I bought the EOS5 a few years ago for £35, including the handgrip. It’s a good copy with working eye-controlled focus point selection and best of all, the leatherette covering hasn’t turned to goo as so many similar Canon models do. It fits modern Canon lenses, but as I’ve recently sold most of mine, I now tend to pair it with an old Sigma 50 that once fell about four feet onto concrete and so can never be sold. While the set-up is big, it’s very easy to use with auto-wind, auto-focus and aperture priority. It’s a refreshing alternative to my usual rangefinder set-up.

The Irish summer has been great. That doesn’t mean that we’ve had the heatwave and endless sunshine that the rest of Europe has, but by County Clare standards, it’s rained less often and the temperature has hit double figures on most days. On this particular Saturday morning, the early rain was clearing as we got to the beach and other than a couple of surfers, we had the place to ourselves. Emily made the most of the space and had a great hour of digging, splashing and doing other three year old stuff.

As usual, Kodak TMax was entirely predictable (in that for some reason, it’s not quite as nice as Tri-X) and doesn’t seem to have suffered when processed in my very old, and internationally travelled Ilford Ilfotec HC. 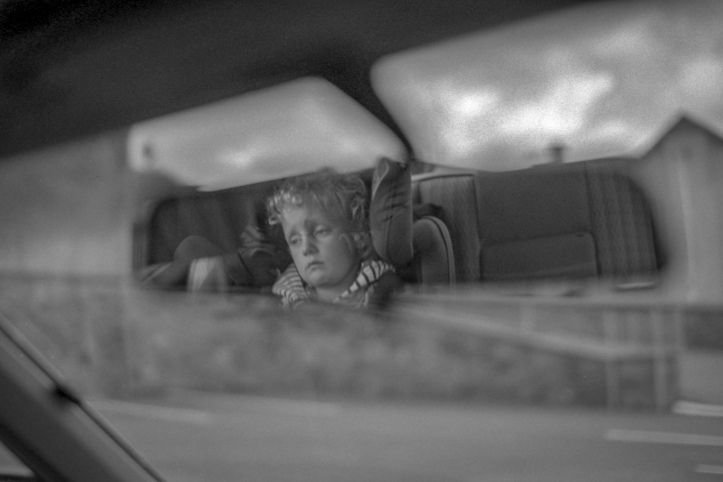