Asking people to take their picture is not something I’ve been comfortable with in the past, despite the subject almost always agreeing when I have. So, in an attempt to address this phobia, I set about a project to photograph ‘strangers’ in our local country park.

This isn’t as sinister as it first sounds. The portraits are ‘people aware’ and I have asked permission for each. In the pictures, I’ve looked to capture the relationship between the park and its users and some of the feeling that the people have for the place. Each picture has been taken within the park and I’ve made sure that by producing full-length portraits, that the subject’s surroundings are visible, even if out of focus. I wanted the park to take equal billing in each picture as the subject.
I am interested in recording the people and groups that use the park and the reasons that they do so. It is a special place and I realise how lucky I am to live so close by – a feeling that is becoming stronger as I talk to more strangers as I photograph them. 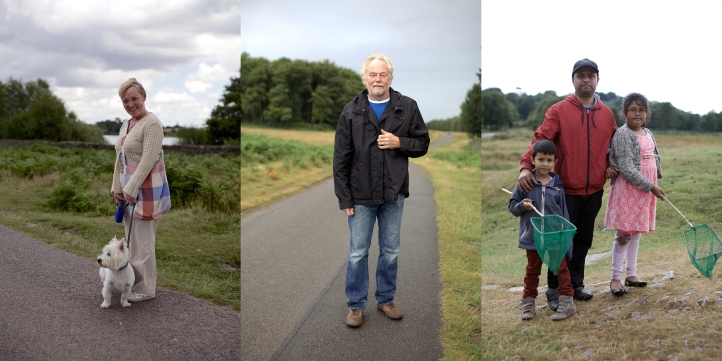 50 pictures in and I’m enjoying myself! The more times you ask, the easier it gets. The response has been great from just about everyone that I’ve approached. I did begin to self-censor, thinking that I’d got ‘enough dog-walking, middle-aged, white ladies’ for example. This made me consider if I was trying to show an accurate demographic representation of the park users or just the ‘interesting’ people, and I’m still not sure of the answer.

The project has already taught me a lot about my own opinion forming process and how far off the mark visual first-impressions can be. By extension, portraits will always be subjective and the viewer of these photographs will form their own opinions of the people featured, despite there being little information to go on. The way people dress is less of a clue to their social standing, employment status or history than it was in Sander’s day.

The subjects didn’t know they were going to be photographed. They haven’t dressed up or applied make-up as they may have if they’d received an invitation in advance. It’s halfway to Phillip Lorca-DiCorcia’s Heads that showed how people look when they don’t think anyone is watching. Interestingly, one or two have run their fingers through there hair or re-arranged their clothing showing a different attitude to people looking at a picture of them, rather than just seeing them in public.

Similarly, I felt it important not to tell my new friends if they should smile or how to stand. If I had, I’m influencing the opinions formed by the photograph’s viewer by managing the subject’s behaviour.

The creation and subsequent reading of photographic portraits is a complicated but fascinating area of the study of photography (and psychology) that I’d not really considered before now. For now, I’ll carry on until I’ve collected 100 strangers, before deciding how best to show the results.