It’s only recently that I’ve begun to pay attention to architecture and the built environment around us, but the more one reads on the subject, the more often certain buildings and their architects are mentioned. Despite there being few James Stirling buildings around, they seem to cause great debate and division. They are hugely important in the development of modern architecture and the re-development of the UK after the war.

He created a trio of university buildings during the late 50s and 1960s that were radical, futuristic and controversial. He designed them at the limits of material technology – for example, all three use huge expanses of glass, but when they were built, the glass and it’s supporting aluminium frames tended to leak and suffered poor thermal performance. It seems that as well as this experimentalism,  they suffered from budget constraints and an over-optimism about the rate that they could be built, meaning that they were always going to be up against it.

But despite this, they all still stand, and importantly, still perform the function that they were designed to do.

The first of the three to be built is the nearest to home – the Engineering Building at Leicester University, designed by Stirling and James Gowan and completed in 1959. It’s made up of a large workshop building, along with towers containing lecture theatres, laboratories and offices and was squeezed into the corner of the university plot.

This view shows the workshops to the right, the podium and entrances, and the sloping floor of larger of the two lecture theatres. 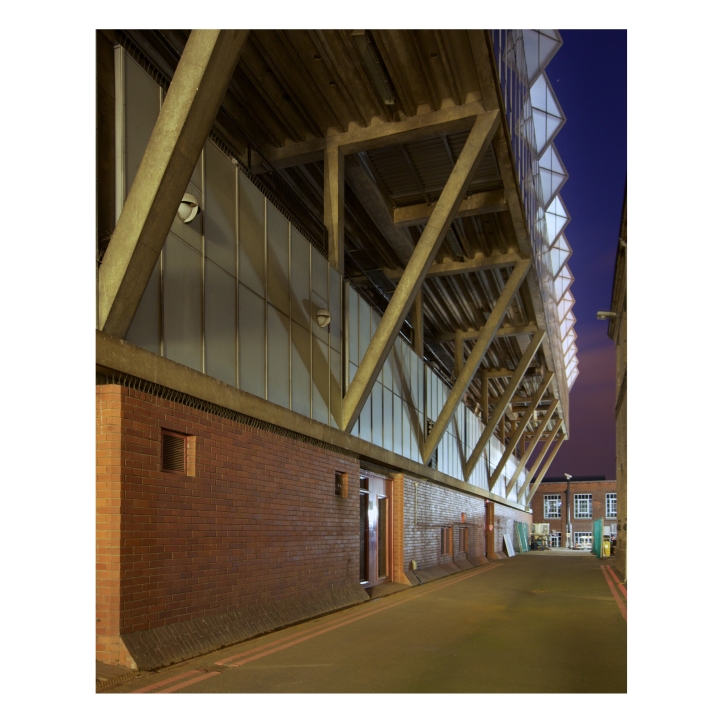 This is the rear of the workshop areas, where it is on three floors. This cantilever allows cranes to lift plant and equipment through hatches in the floor, directly off the delivering vehicle.

This is the rear entrance between the workshops on the left and the towers. Both towers have a lecture theatre above the podium, and the other accommodation stacked above. In this, the lower tower, are four floors of research laboratories and as with the workshops, the overhang allows equipment to be hoisted directly in through removable floor panels.

Like the other buildings in the trilogy, this building features red faced walkways and handrails. In Cambridge they’re white and very obvious. Here, they’ve been painted red to match the brick. The podium is windowless, monolithic concrete, clad in tiles and brick.

The second of the three is the Faculty of History Library, Cambridge of 1968. Here, many of the themes and finishes used in Leicester are applied to a very different brief. This building was to be a showpiece development while also being practically useful. The resulting glass pyramid provides exceptional natural light to the reading rooms and offices, but again, cost cutting during construction led to cheap materials and processes being used.

It remains visually stunning (although smaller than it looks) and like other Stirling buildings, is intuitive and ‘makes sense’ to someone visiting for the first time.

The main entrance and the signature lift towers. 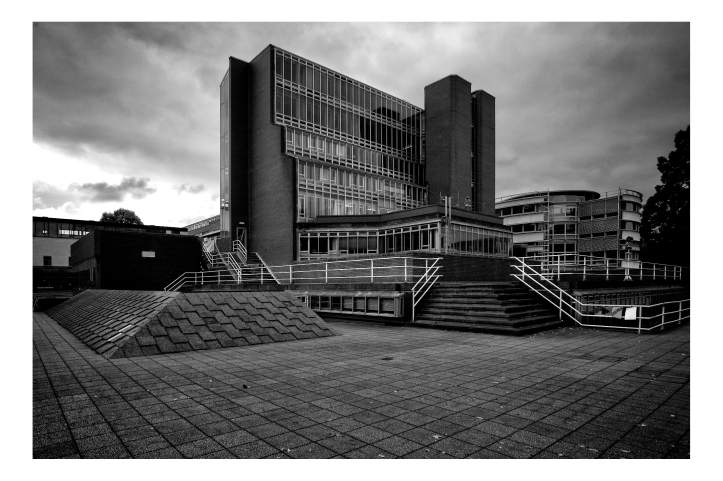 Shortly before construction began, the whole plan was rotated through 90 degrees meaning that the main entrance should have been more central to the campus layout.

The top of the tapering, glass roof to the reading room. 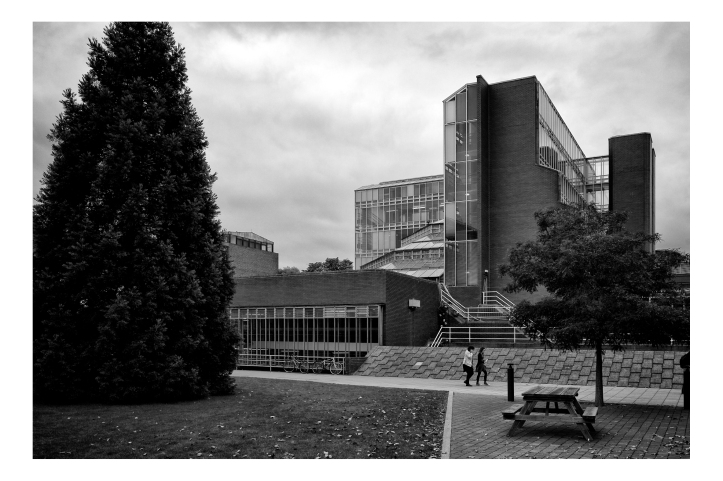 These are two magnificent structures, that get ever more interesting the more one explores (both the buildings and their history). I look forward to a return to Oxford to photograph the third, and possibly most maligned in the trilogy, The Florey Building.