Only in England – Photographs by Tony Ray-Jones and Martin Parr

On Saturday, I attended the OCA’s study visit to the National Media Museum to see two exhibitions. The first was the Tony Ray-Jones/Martin Parr combination, Only in England. The second, that I’ll write up another time, was Open For Business featuring British manufacturing companies shot by 9 Magnum photographers.

Having secured my place on the trip, I researched Ray-Jones and particularly the role he played in influencing Parr’s career to date. The show has ‘come home’ to Bradford (the National Media Museum owns the Ray-Jones archive) after a run at the new Media Space in London and is presented in an interesting three-part format:

Ray-Jones left England at just 19 to study at Yale. He quickly made a name for himself there and subsequently as he learned from Alexey Brodovitch, an influential style leader and mentor to many of the photographers of the time. We read in the notes of TR-J, presented as part of the exhibition (more on those later) that he made plans of how he would impose himself on the photography scene in the UK on his return late in 1965. He would bring an uninhibited American approach and lead an accelerated development of ‘street’ photography in the UK – something that was virtually non-existent at the time.

And he did make a difference. Despite only living another 7 years before his sudden death of Leukaemia, his legacy is clear to see in many British photographers’ work, but nowhere more obviously than in Martin Parr’s. Parr’s career began shortly after Ray-Jones’s death and it appears from the sets here that the baton was obviously passed on.

The first images we encounter in the show (assuming one starts from the ground floor) is the original TR-J work – Photographs of England (1966-1969). The prints are small by modern standards and initially appear a little dark and contrasty. We have to remind ourselves however that these are the 1960s originals, hand-printed in the darkroom by the man himself using enlargers, chemicals and trays. Maybe he was limited to this size by his equipment. Studying the images, there is detail in every dark area – they are perfectly printed and it becomes apparent that the look of the images was worked at. They are very consistent.

What strikes us immediately as we view the work is the exceptional composition in each. Whether it is people standing, laying, looking or busying themselves, there are subtle but obvious triangles, lines and implied shapes everywhere. It is a masterclass for anyone studying balance and composition. Eyelines are particularly strong in the work with people looking at each other or out of shot, drawing our eye around the frame. There are often multiple narratives playing out in a single frame. 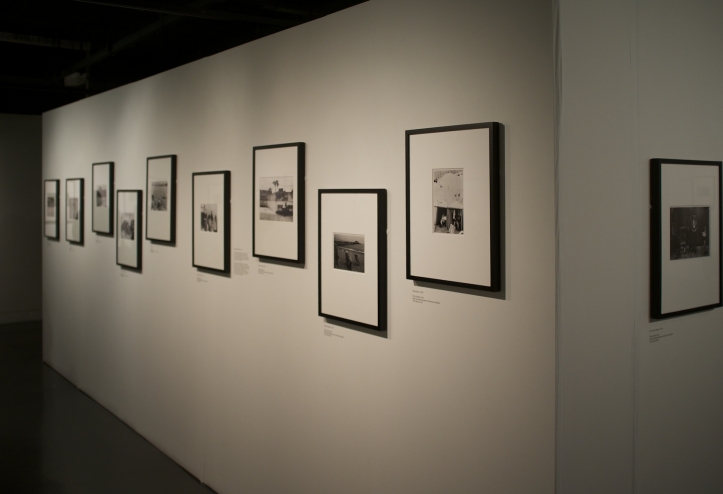 While the work is presented in refreshingly random sequence, several themes quickly become apparent. People often seem to be waiting for something. The subjects in the shots seem to be alone but involved in the same activity – waiting for whatever it happens to be. The work seems to capture what the English do best – that is to go to places and… sit! This theme is repeated in car parks, at fêtes and particularly at the seaside. It looks like my childhood – my teeth are grinding sand in my sandwiches and I can smell the calamine lotion on my sunburn.

While the busy scenes are frozen moments in time, strangely, it feels like these moments could have lasted for days. The melancholic feel captures what is obviously a period of great change in British history as the austerity and formality of the post-war years finally thaws.

The archive material from Ray-Jones’s notebooks that are interspersed throughout show us that he was a man with a plan. Literally. We read his ‘Plan A’ (and entertainingly, ‘Plan-A amended’. Looks like he didn’t even want to think about a Plan B), written before he left America and the details of how he would develop his style and work towards his first book. It shows a clear vision and direction that, when we study the images, has been put into practice.

Also fascinating are his draft letters to people that he wants to be involved in his projects and the famous page from his notebook detailing a 13 point ‘Approach‘. It is something that any photographer could use with advice (to himself) such as ‘don’t take boring pictures’, ‘get more involved (talk to people)’ and ‘no middle distance’.

In another page, he debates the merits of single shots and ‘photo stories’ saying that a sequence holds attention, but that a single image should

[…]have initial impact to catch attention of the spectator, then it should draw him in to it; with its subtleties it should delight, mystify or shock

There is one image amongst the 50 here that does not feature people (and I mean feature people, not just include them) and that has a pair of dogs on a beach. All the famous Ray-Jones work is here including Glyndebourne, 1967, Beauty contestants, Southport, Merseyside, 1967 and best of all Beachy Head boat trip, 1967. This is a wonderful photograph and deserving in my opinion of the pages devoted to an essay (by Ian Walker) about it in the catalogue that accompanies the show. It captures the entire exhibition in one shot. The composition is such that we are drawn immediately to the young couple in the centre, before our eye wanders over the assembled cast of individuals (importantly) that could almost have been positioned around them. The couple are casually dressed, their hair is long. They look different to the older characters in the frame, each of which is looking at something beyond the edges of the picture. The couple’s attention (and ours) is only on each other, forever…

The second part of the exhibition sees Martin Parr, a photographer acknowledges his huge debt to Ray-Jones, use his ‘experience as a photographer, collector and curator’ to select further unseen Tony Ray-Jones images from the Media Museum’s collection. He has then printed and displayed them to his own taste, without reference it would seem to TR-J’s presentation style.

The prints are obviously larger and more grey than the dark prints of the previous room. The more subtle difference however is in the selection of images. To me there seemed to be slightly less of the dislocation seen in the Ray-Jones originals and more family groups. The people featured are more likely to be interacting with one another rather than being busy with their own thoughts. There is more eye-contact with the viewer and the humour that we’d seen occasionally before seems to emphasised. We also see an image of what could only be described as the ‘middle-distance’.

In this section we also see more of Ray-Jones’s notes and a display of contact sheets containing the individual images that we have become familiar with. From these we discover that the couple eating their lunch next to the field of cows in Glyndebourne are actually one of 6 or 7 but were presumably chosen for their aristocratic look and matching table and chairs. We also see test prints and developing masks that he has used in the darkroom, helping explain the skill, craft and patience that went into these print.

The notebook pages again show us the thought and planning that has gone into Ray-Jones’s work. On one page, he lists potential subjects in his search for English eccentrics. My favourite of these is ‘fan clubs of dead pop stars’! 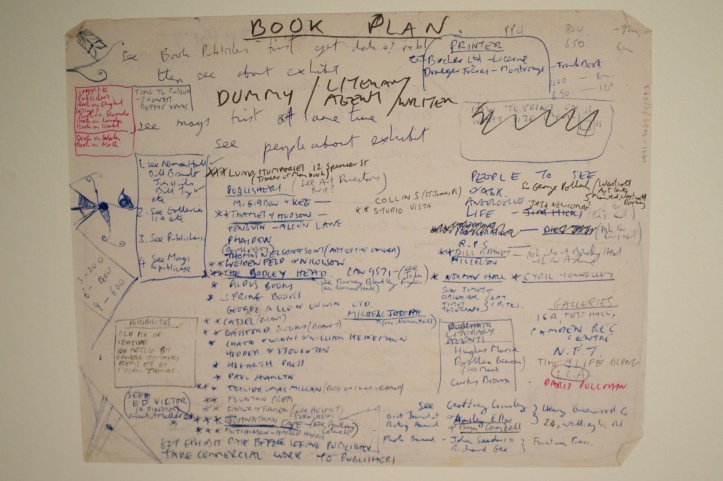 The third and final part of the show is Martin Parr’s early set shot in and around Hebden Bridge featuring the lives of the local church going, hill-farmers. It is the sort of work that can only be produced by someone living with their subjects and comfortable in their surroundings.

The influence of Ray-Jones is obvious and Parr is almost ‘paying tribute’. Again, they are printed (digitally) in Parr’s style – larger and greyer. They show series of grouse hunting, church congregations and an elderly couple that Parr befriended during his time in the area.

The pictures here embellish an interesting historical timeline, showing how Parr picked up the TR-J baton and brought it to his environment. They are obviously from early in Parr’s career – he has not yet developed the skill that Ray-Jones had demonstrated in the previous set (and that Parr has later) in being able to entertain, document and provoke in a single frame. They tend to me more documentary, but show some of his later humour. The stunning composition is missing and the work is more about the subjects themselves, showing them at home, at work and at prayer rather than at the seaside.

Popular coastal towns still look similar today with their ice-cream stands, amusements and tat, but much of small-town England has changed massively since the mid-1970s. As a result the work looks to be from longer ago that Ray-Jones’s work and makes me feel old… 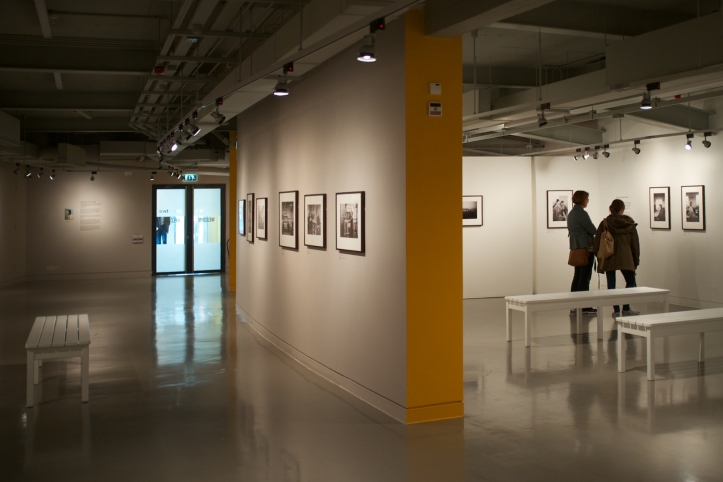 It is a fascinating show. The Tony Ray-Jones work is brilliant and when viewed in this context, one realises what a loss he was to photography in this country and beyond. Seeing his work alongside the early Martin Parr set shows us the influence on him directly and in turn, on the development of photography in the UK.

The Non-Conformists is great too and works better as a set, a study of a community, but without the individual excellence of Ray-Jones’s shots that work on different levels; being exciting to look at, emotive, humorous all at the same time.

The Martin Parr selections of Ray-Jones’s work is the part of the exhibition that is least satisfying. While the photographs are still first-class, they don’t quite have the same feel to them. Strangely, they feel more like later Martin Parr pictures than Ray-Jones’s. As a result, the whole show feels more Parr’s than Ray-Jones’s.

My takeaways were an appreciation of Tony Ray-Jones’s work and an understanding of how photographers can be influenced and build on another’s work. Also, it has re-emphasised the importance of note taking and planning.

I’d thoroughly recommend the show to anyone and I look forward to showing my parents the book of the show to see if they recognise anyone!