As the lockdown began to ease in Ireland, it was time to start planning a more trips away to explore our new country. Since our arrival, I’d been interested to visit Achill Island to explore Ireland’s biggest island, and so when an opportunity presented itself, I booked one of the few B&Bs that was open and had vacancies.

I finished up work on Friday afternoon and headed north. Two and a half hours later I was crossing the short bridge from the mainland to the island. As usual, I’d bought a map in advance and done some homework meaning that as soon as I arrived, I drove to Minaun Heights, and followed the service road up to the radio masts. From there, a short walk took me to the summit at 466m and its panoramic view of Achill Island at my feet, Clew bay, Clare Island and Croagh Patrick in the distance. It gave a third dimension to the map that I’d studied at home.

At the summit is this strangely baby-faced Mary. I’m not sure how she’s held down, but given the exposed location, it must be pretty firmly!

Bright and early the next morning (the pubs were still shut because of the pandemic, so no hangover to deal with) and with a belly full of ‘full Irish’, I set off for the main event of the weekend, a ride along The Great Western Greenway to Westport (and back again). As a cyclist coming out of retirement, it would be the longest ride I’d done in a couple of years, but given most of it was along a former railway line, it should be a fairly gentle 84km.

Here are the snaps I took along the way – you get the idea.

I set off from the B&B in Achill village, freewheeling downhill to the bridge to the mainland. 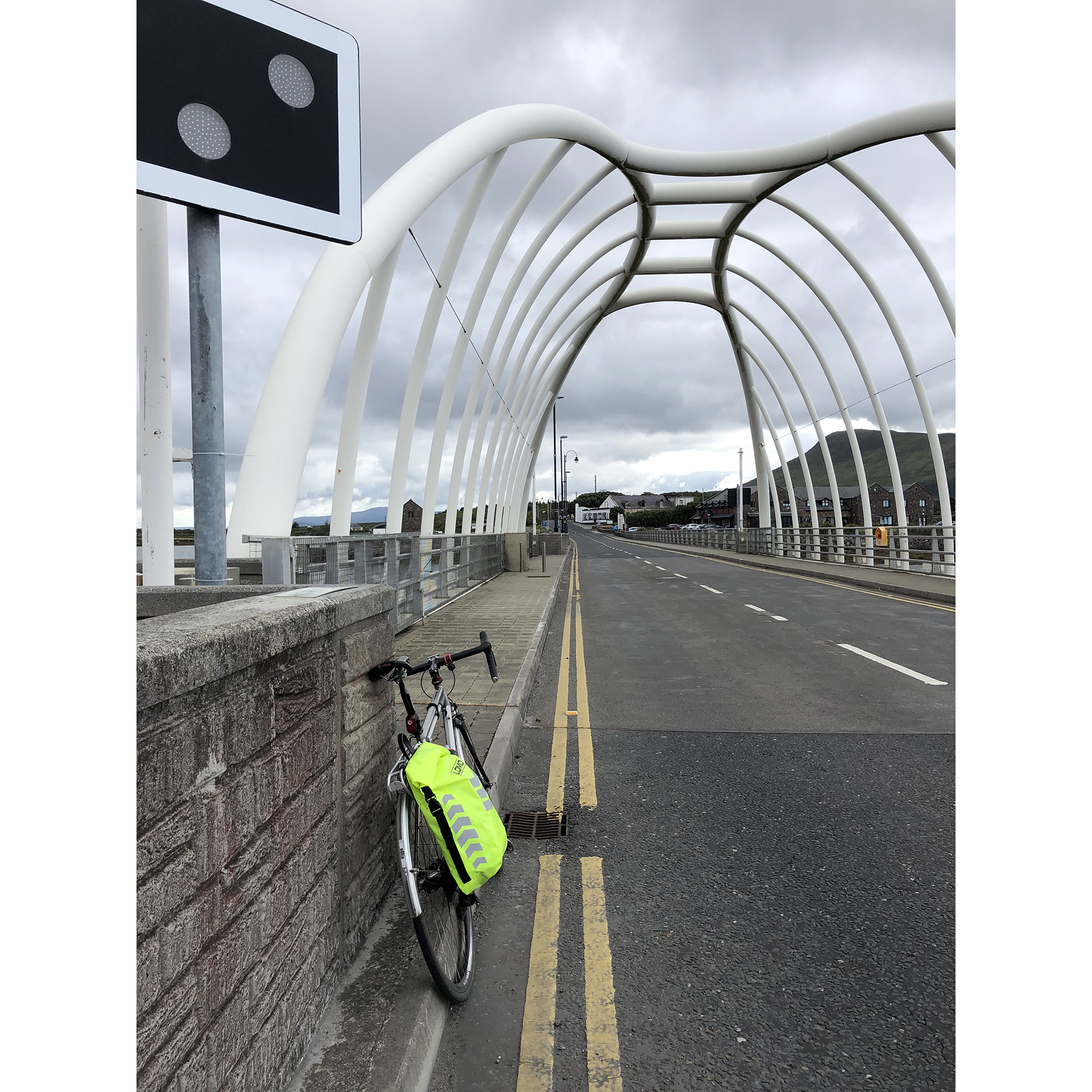 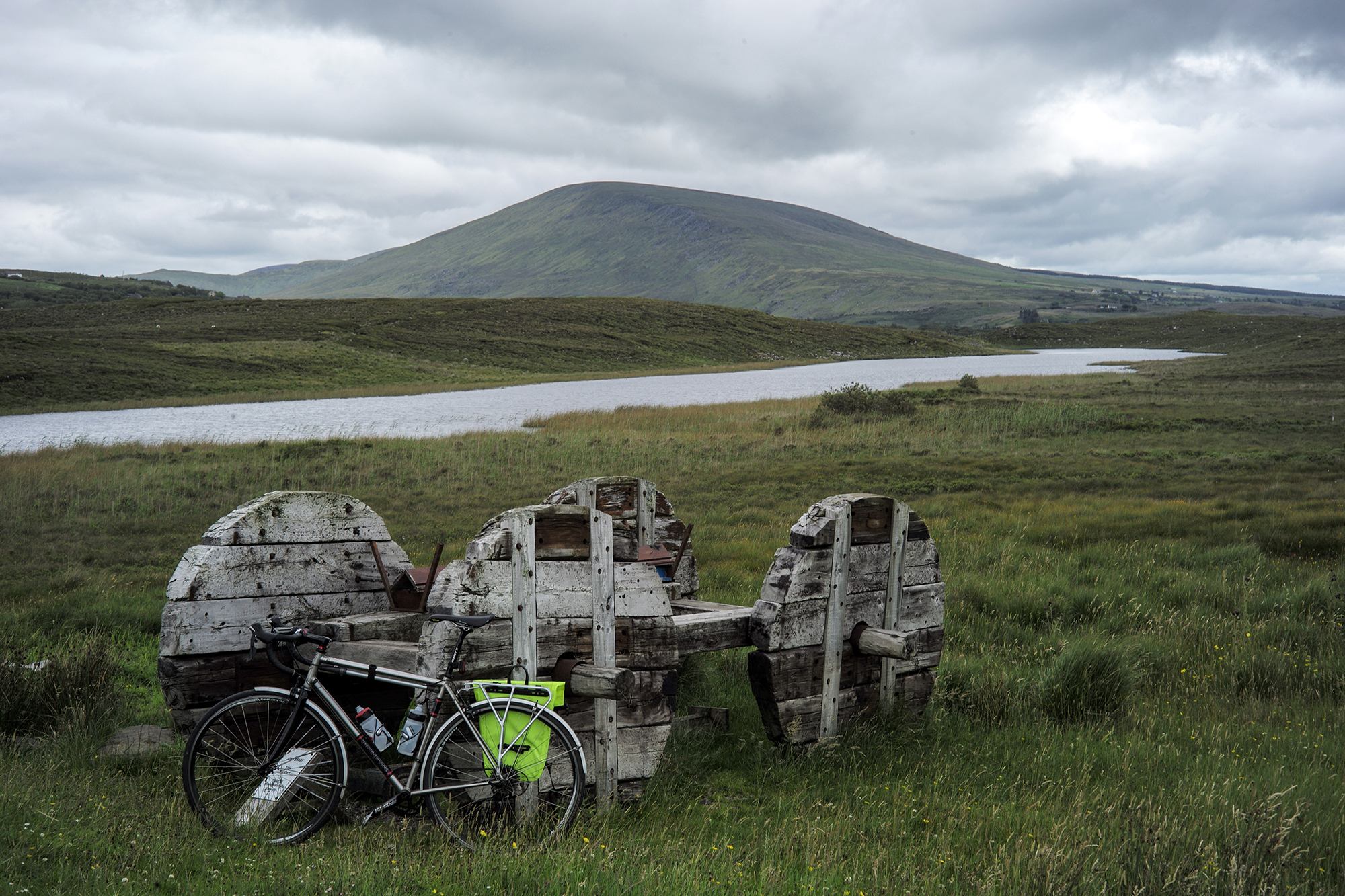 Westport is beautiful town, but every time that I’ve visited, it has been thronged with tourists. This time around, it was the first weekend since the lifting of some of the lockdown restrictions, the forecast was good and the good people of Ireland were staycationing as they’d been told to do.
From Westport (and the excellent ‘ThisMustBeThePlace’ cafe), I cruised out through the grounds of Westport House to the harbour with its excellent view of the pyramid-like Croagh Patrick, a mountain that I’d climbed the last two years on the Reek Sunday pilgrimage.

It was great to see the trail get busier through the day with many families and groups making the most of the rare weather. The surface is excellent on the whole length of the trail and there’s plenty of interesting things to see along the way including sculpture, mountain and sea views, and old stone bridges. There are a couple of short, sharp climbs but for the most part, it’s a ride suitable for all.

A view of Clare Island off in the distance. 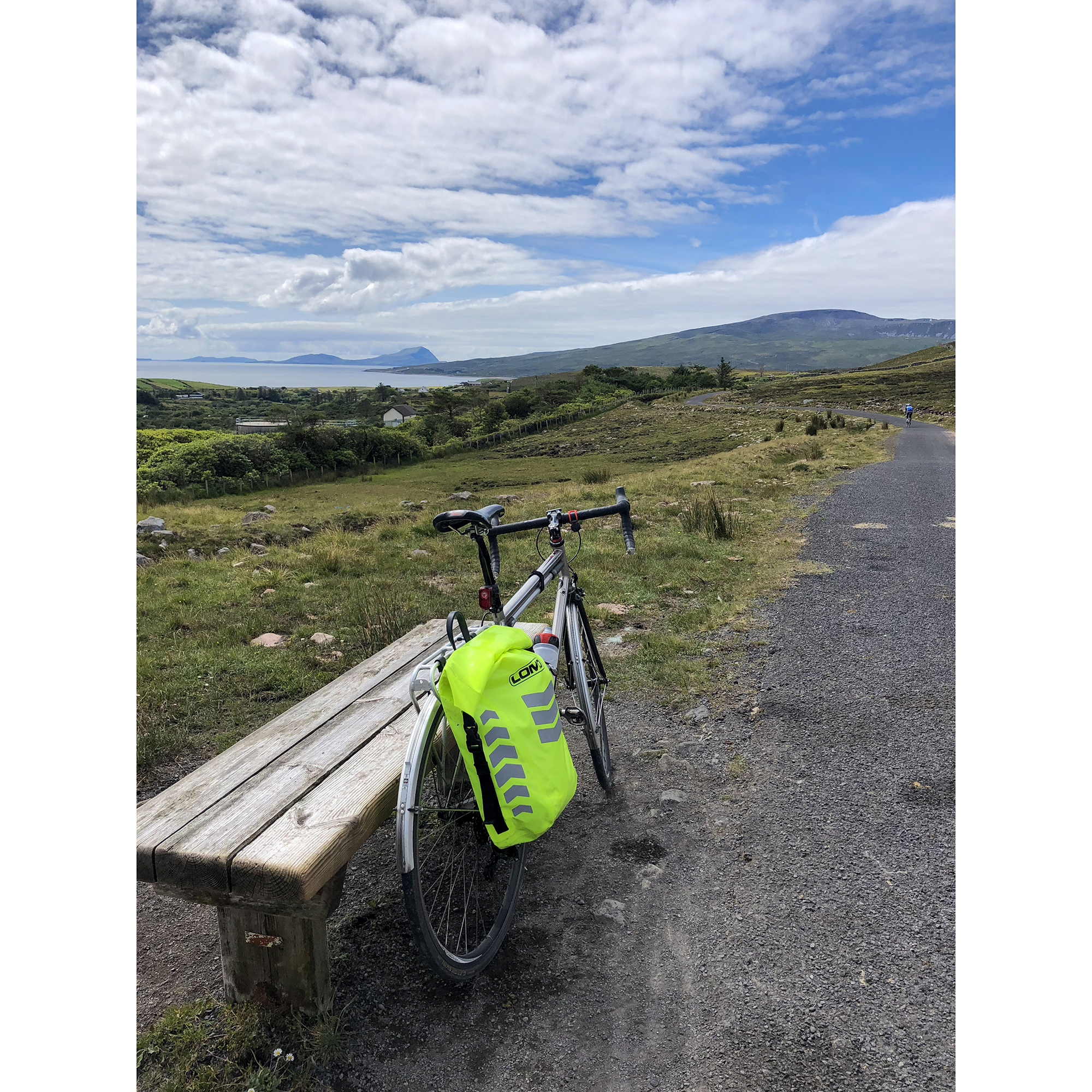 The trail overlooks the amazing Clew bay for long stretches (Clew bay has hundreds of small islands sheltering within it. I remember seeing it for the first time on a map and thinking ‘surely it can’t really look like that’. It does). On the north side of the bay is Mulranny and its beach. I rode the steep decent down from the trail, through the town and out across the nearshore to the beach. 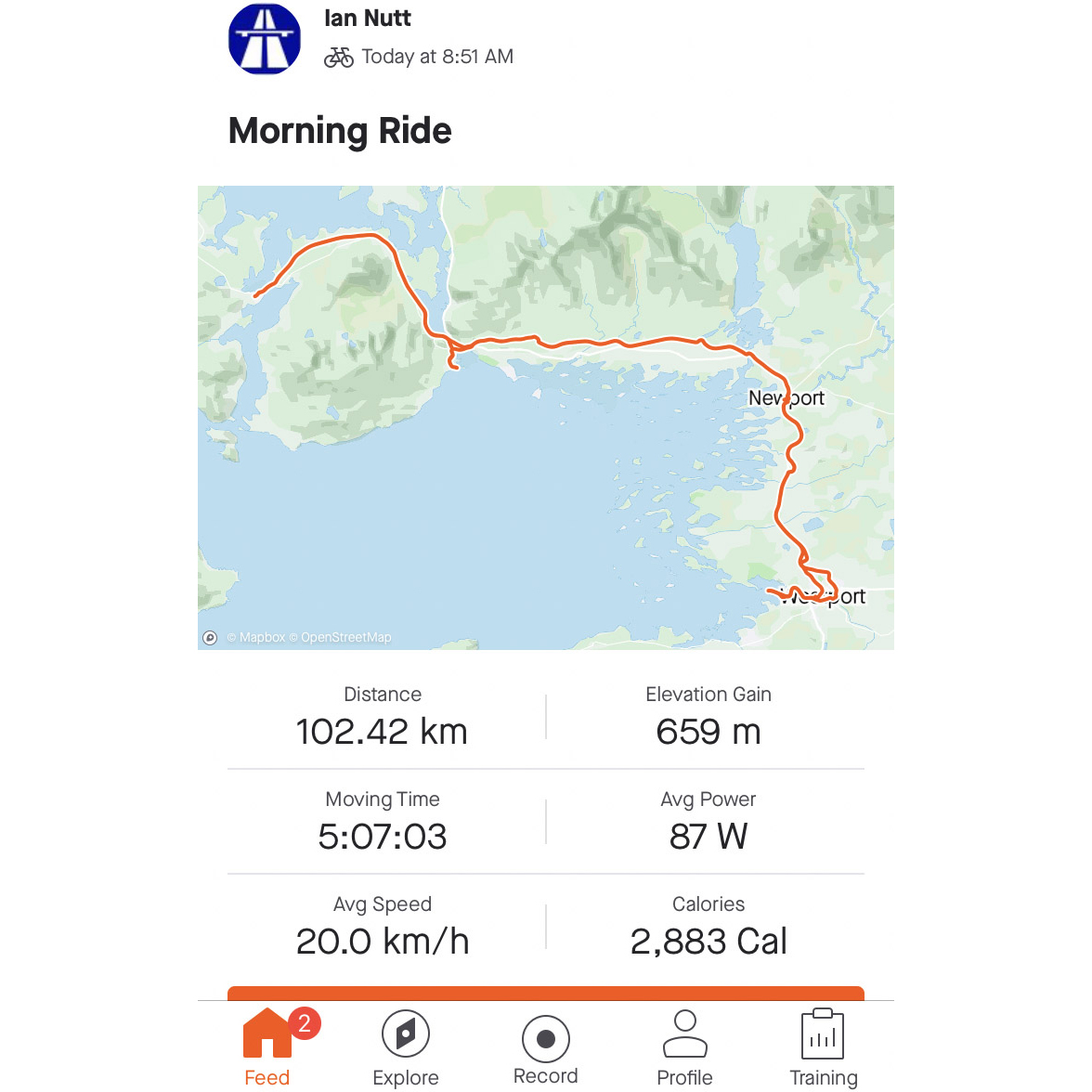 My 84km ride ended up at 102. The diversions in Westport to see the harbour, and Mulranny to spend 5 minutes on the beach adding to my total. Despite a westerly wind making the return leg more difficult than my outward journey, it felt great to have completed the ride and still feel fresh enough to be able to walk to a local hotel for a guilt-free fish and chips and my first draught beer for four months (just a shame it had to be a Guinness). 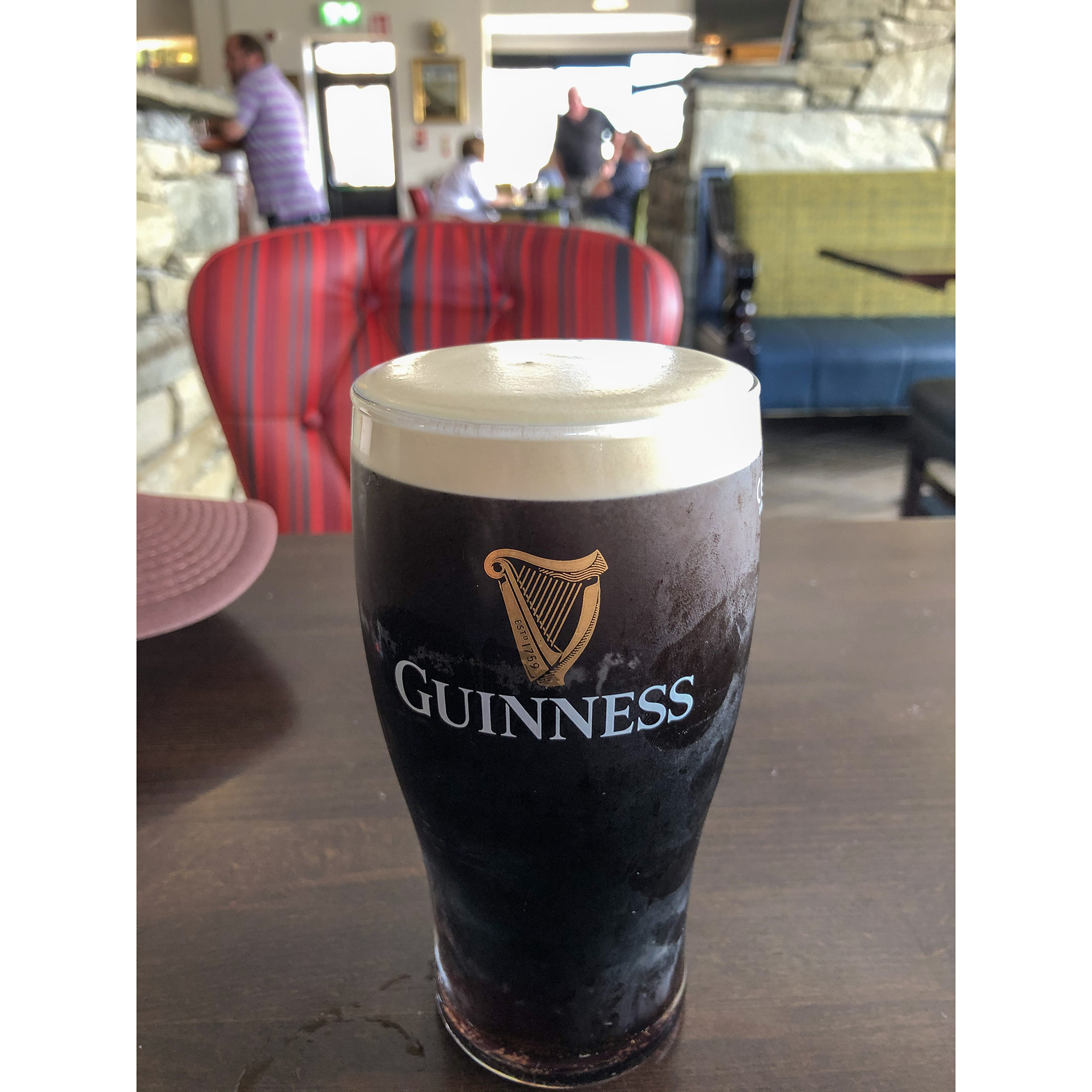 Sunday morning and the weather was terrible. Heavy rain and an extremely low cloud base meant that I’d be seeing only a little of the island by car, stopping off at a few ‘sights’. Among them was something else that I’d read about ahead of my trip, the island of Innisbiggle and its tide races. In the two hundred meters between it and Achill are some of the fastest flowing currents in Europe. Having kayaked in some gentle tide races, I know how terrifying they can be and was interested to see how these would look. A quick check of the tide tables told me that by the time I’d finished another full-Irish, packed up my room and driven up to it, the race would be at full speed.
The snap below demonstrates that there’s no way that an iPhone is going to convey the awesome power of thousands of tons of water moving very quickly…

In calmer conditions, small boats cross between the islands, from the jetty that I visited at Bullsmouth. I was interested that boats all contained small bottles of holy water to bring them luck when facing the race. I’d need a little more reassurance…

Another ‘must see’ on Achill is the deserted village between the village of Keel and the island’s biggest hill, Slievemore. This is the remains of upto 100 dwellings that have been used on and off for 5,000 years, and were still in use as ‘Booley’ houses within living memory. (A Booley house is one that is used during summer months by people tending cattle out on the hills.) The pouring rain and grey skies made a walk through the buildings a haunting experience. One couldn’t help but imagine what conditions must have been like for people that lived in such basic structures.

The pouring rain also prevented me from taking more than a couple of quick snaps.

I paid a very quick visit to Keem Bay at the western end of the island and watched for a few minutes as a group of Polish campers pulled down the remains of their tents and threw them straight into the litter bins. I don’t imagine that they’d had any sleep in the wind and rain that had bettered the island all night and turned their tents to trash.
I gave up on the weather and headed for home via the ‘Atlantic Drive’, a loop of single-track road the skirts the southern edge of the island. The scenery was spectacular, but again, mostly too wet to photograph.

And so, another stunning part of Ireland that demands further exploration should I be lucky enough to get a long enough break from the weather.