Portugal with a TLR (part one).

As you’ll no doubt have read in my previous couple of posts (Our Man In Portugal and What’s In My Bag – Portugal Edition), we were lucky enough to get a few days away in Albufeira during October.
I took along my Yashica-Mat 124G and shot eight rolls of Kodak Ektar with some results that I’m pretty pleased with. At the risk of overdoing things, I’ve broken up some of my favourites into a couple of blog posts…

As usual, whenever a fella like me (born and raised as far from the sea that it’s possible to live in the UK) gets to spend time near the coast, I’ll make the most of the opportunity. This trip was no exception and I visited the beach near the hotel every day, including some early morning and late evening walks to see the sun come and go.

The beach was midway between Albufeira and Vilamoura, and backed by fragile looking sandstone cliffs. The sun rose at the end of the beach, turning the cliffs a wonderful orange.
A flock of gulls were hanging around on one of my morning visits and so I thought I’d try to get a silhouette of them taking flight. This led to me charging up and down the beach, trying to scare the gulls into a flightpath that would take them above the horizon and into the sunlight. I was doing this while trying to frame the shot through the waist-level finder of the Yashica TLR. I only fired the shutter once, and this was the result.

A bohemian looking family from Germany created a structure on the beach, adding parts to it each day. This is another dawn snap of the early stages of their construction.

One the penultimate day of the trip, I finally got around to renting the fat bike that had been parked outside the hotel lobby. It cost the equivalent of three days of car hire but was a lot of fun. I may have tried a little too hard to burn off some of the all-inclusive excesses, but the bike’s ability to ride on loose, dry sand was remarkable with its 4.4″ tyres just rolling across whatever surface I tried it on.

Away from the beach for a while and I took another trip into Faro, trying to meet the guy that I’d photographed a few years before (you can read the story here). 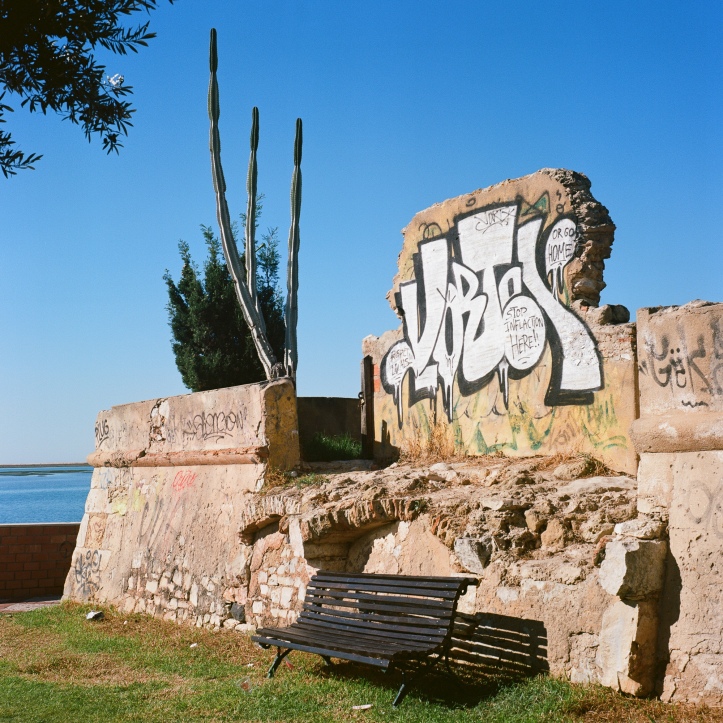 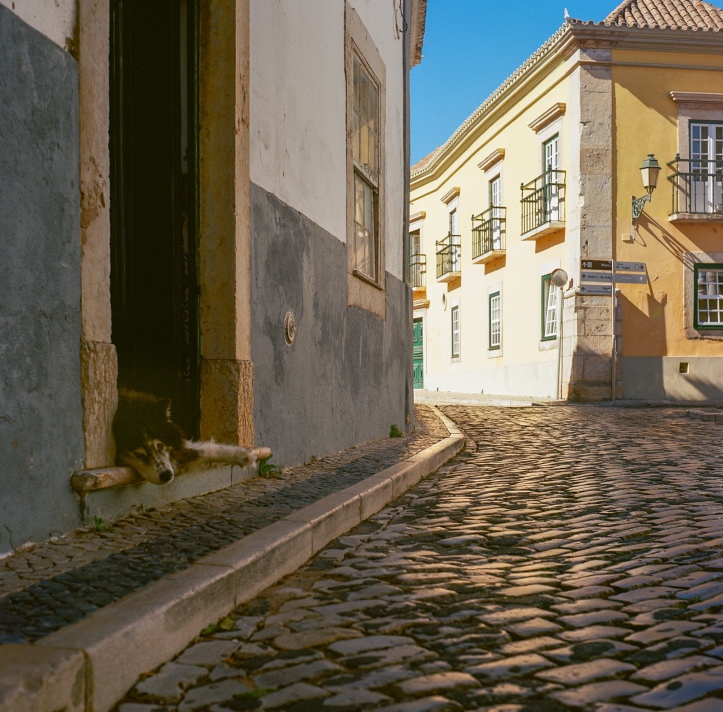 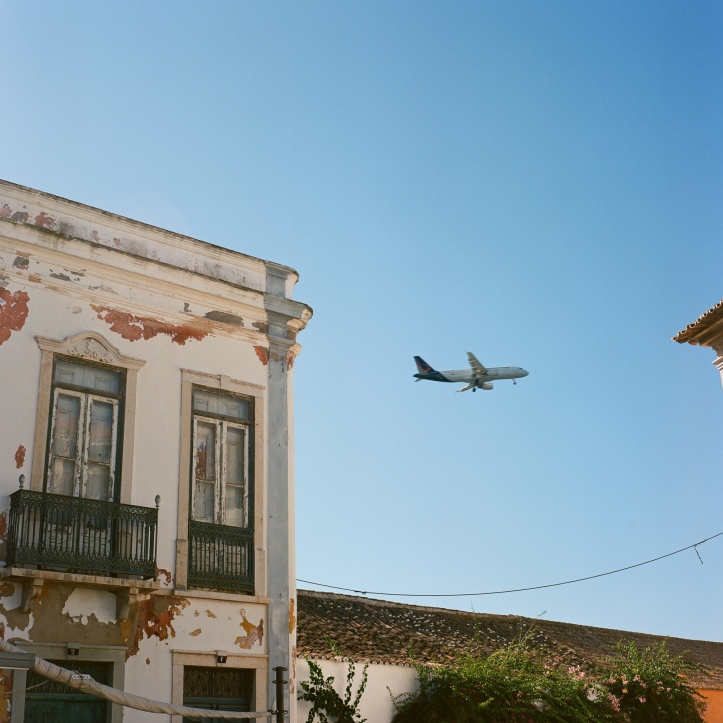 As I wandered the streets of the old town, I was amazed at the amount of air traffic coming into the airport. On the final approach, each aircraft was in the same position in the sky, and so even with one-shot on a TLR I was able to predict where the aircraft would be and frame a shot. 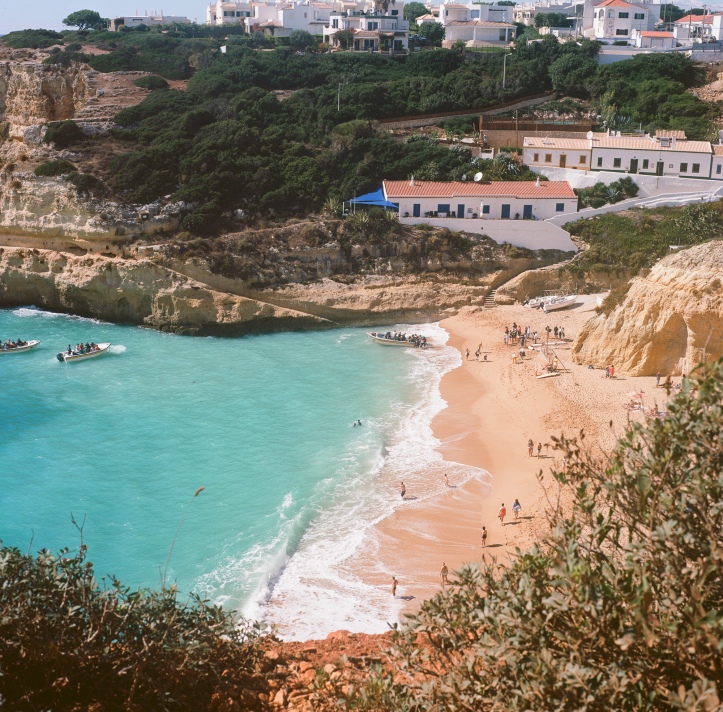 Another day, another trip; this time to see the caves near Benagil and the famous Praia da Mesquita. They really are as impressive as the brochures make them appear. I’m sure in the UK there’d be guard rails and fences. Nothing like that here. 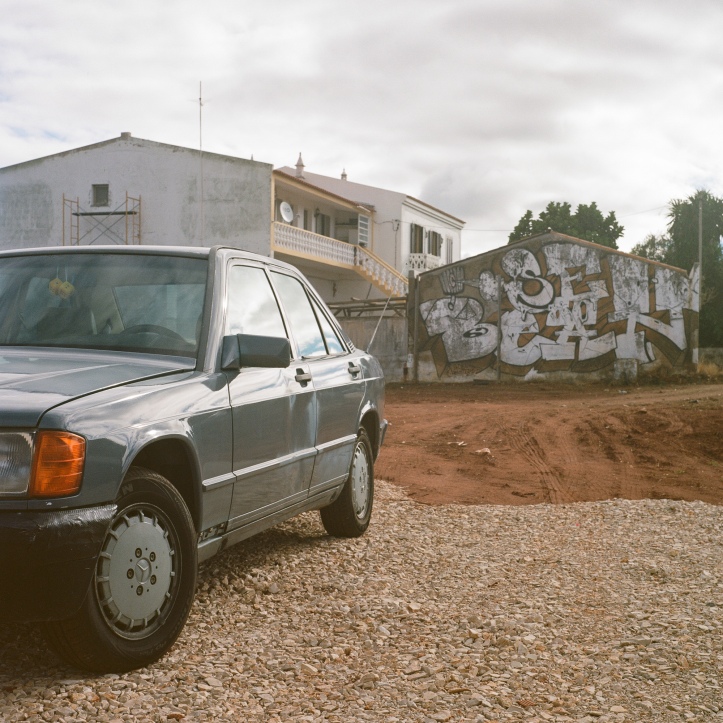 As usual, on my infrequent visits to the Med, I’ll gather pictures of the battered old Mercedes saloons that are everywhere, especially the late-80s/early 90s models similar to the one that I have. It’s a zine in the making perhaps…

At the end of each day and each trip out to take photographs, I’d return to the family, but not before I’d visit the beach again to watch the sunset. 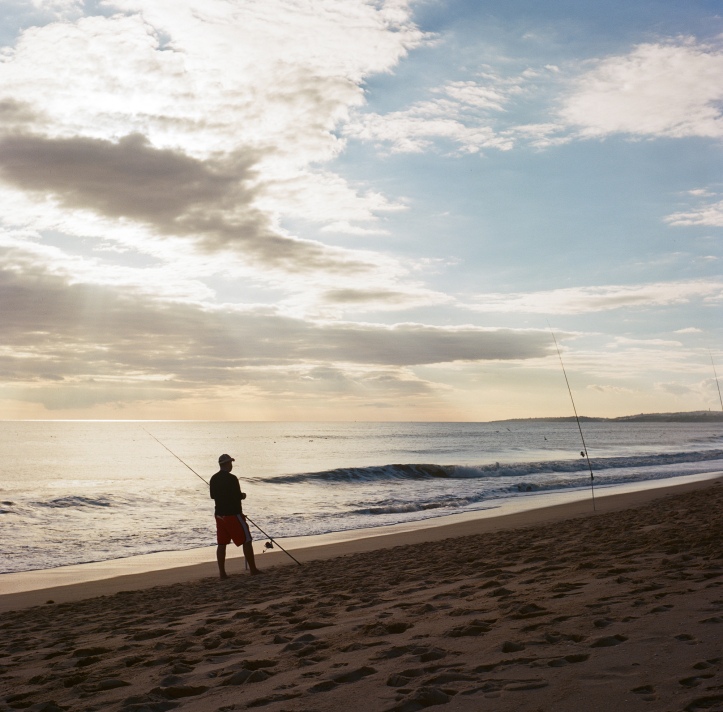 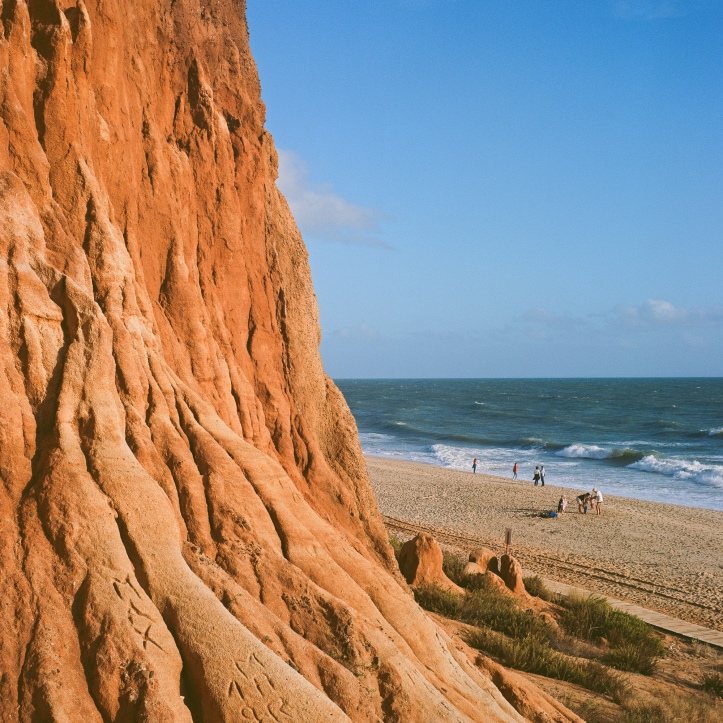 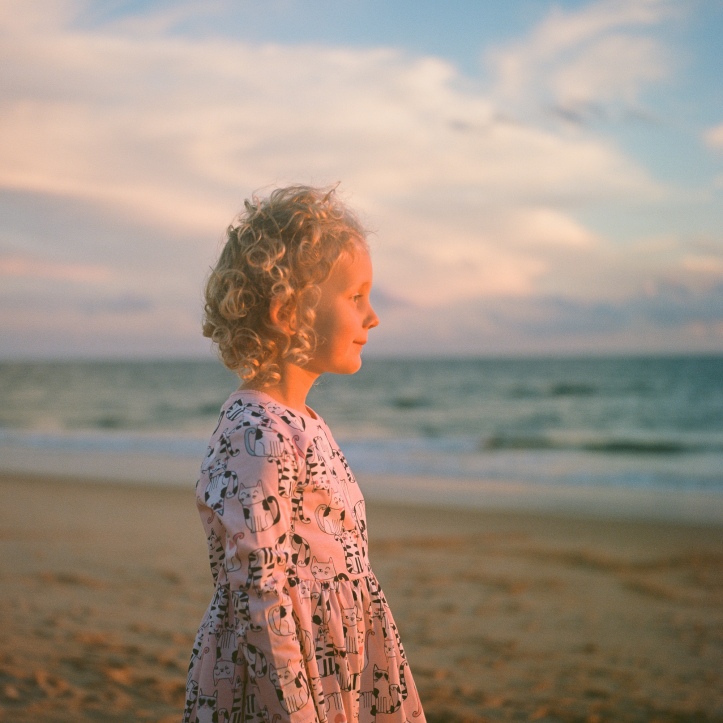 The golden hour certainly lived up to its name (although Ektar seems to turn it slightly pink) and on our last night, I took the girls along to watch the sun drop into the sea and to make a few pictures in the fantastic light.

This picture was taken by Emily. It was pretty comical watching her dealing with the TLRs effect of reversing the image, but she eventually framed us up and took the shot – not bad for a three year old. 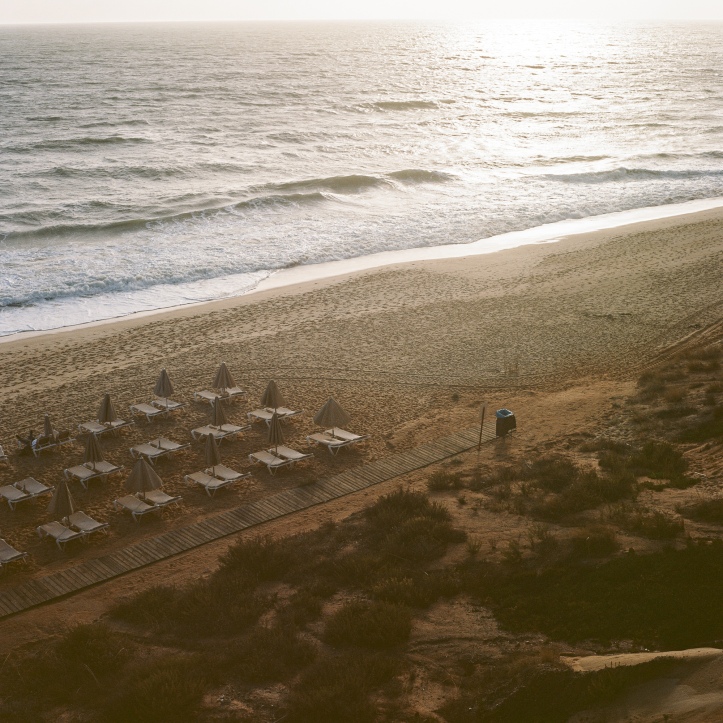 There’s only so many times you can hear the Birdie Song at the Mini-Disco, so on one night, I took a stroll and shot a few twilight pictures of a nearby road that had had the LED streetlight treatment.
It was my first time shooting Ektar at night and had to work out the reciprocity by Googling a curve and applying some monkey-maths while standing in an olive grove. It did OK…

That’s it for now. Thanks for reading, and there’ll be another post along in a day or two with the rest of the pictures. If you want to make sure that you don’t miss it, how about subscribing by email using the box up there on the right?