As I described in my first 52 Rolls post of 2017, I plan to slow things down a little this year. After last year’s excesses, I hope that by leaving time between the taking of the picture and choosing what to show, I’ll not be tempted into posting the pictures that might have been difficult or exciting to make, but only those that deserve to make the cut on their merits and without that influence.

And so these pictures are from all of 2 weeks ago! It’s progress…

Offered below are the highlights from two rolls of 120 format, Fujifilm Neopan Acros 100 shot during the same week on two different camera. If you follow my feeds, the subject matter will be pretty familiar. However (and as covered in that same previous post) I’m working on further exploring these subjects, particularly the night-time scenes, and slowly gathering pictures that can form a longer-term project, rather than just satisfying a one-off blog post as they do here.

I got the Fujica GW690ii back from a loan period with a friend and was keen to start using the camera again. Despite owning it for a few years, I’ve never really done much with it. Because of the 6×9 format and resultant 8 shots per roll, it’d always been too expensive to take risks with, meaning that I just never took it out.

I’m still not convinced that it’ll ever be my ‘go to’, snapshot camera (it is HUGE afterall), but I do hope to use it more often. This first shot was taken on Cossington Meadows nature reserve on a Sunday walk back from the pub. The lens was wide open and it was shot, hand-held at 1/30s but still produces magical levels of detail.

Next up, a couple of pictures from a night-time ‘fishing’ trip with my friend Iain. On these trips we usually look for single LED streetlamps (the sentinels), concrete carscapes and an adjacent pub. Often, we don’t get past the pub and the camera equipment will go unused as we gather beers on Untappd. On this occasion, we managed both.

The shot above was taken with the last daylight silhouetting the pylon through a gap in the trees. The streetlight forming an eerie pool in the darkness and lighting the fringes of the massive willow trees by Rothley Brook. This exposure was 105 seconds long.

The final shot from the roll is of Iain’s erstwhile Škoda. He has done intergalactic mileage in it, touring Britain’s motoring heritage and infrastructure. On the night this was taken, the car (and Iain) were just back from clocking up another thousand-and-some miles on a trip to Scotland. The suspension and a wheel-bearing were complaining that they needed an easier time of things and Iain had suggested the unthinkable – the Oktavia was to be traded in.

I needed to take a picture of it, just in case the deal was done before we met again. I hope that this 30-second exposure, in a backstreet of Anstey, will sit alongside Iain’s other pictures of his faithful car, and bring back memories of the many ‘fishing’ trips that we’ve made in it.

The next few pictures use the same film but were shot with a Yashica-Mat 124G TLR, another lovely camera that I’m lucky enough to own.

These three shots were taken on a walk across the fields nearby. They’re nothing particularly interesting, but form part of another collection that I’ll be trying to gather through 2017. I always find it easier to photograph when away from home. Even though I have lived in this house for less than a year, already the area feels familiar and lacking in photographic subject matter. It’s a personal challenge to motivate myself to find interesting things to shoot close to home. What is familiar to me, may be interesting to others, I just need to learn how to see it… 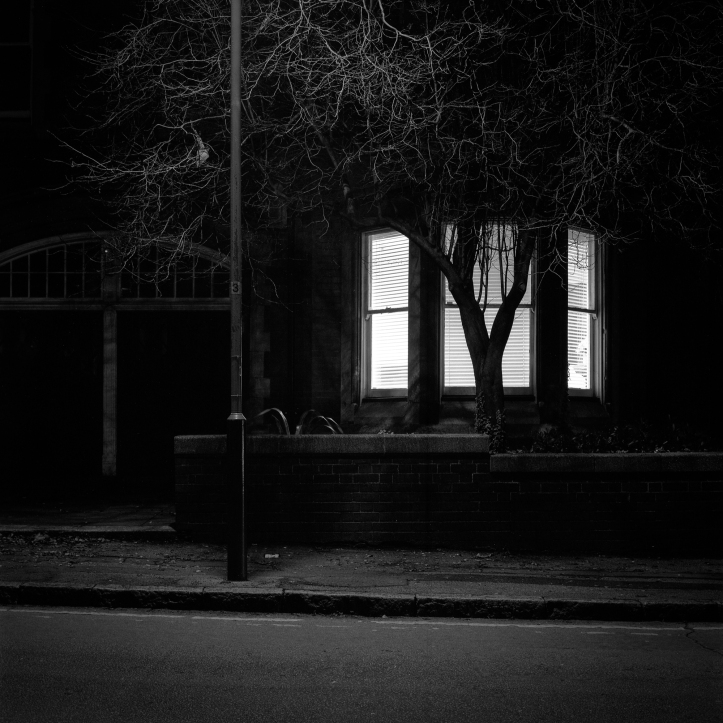 And finally, a couple more #nighttimeneopan images. The Yashica is quite happy making long-exposures using a manual cable release, locked in position, and there is no better film than Neopan Acros for this sort of work as it doesn’t suffer reciprocity failure until past the 2 minute mark.

The first was taken on another walk (to another pub) with Iain and shows 30 seconds of night in the city.

The second was from the end of our street (y’see, I’m trying) in the church car park. The lights had just been repaired and this last, most remote lamp was picking out the fence below it. Beyond this light is a mile or two of darkness and trees, giving my preferred arrangement of a pool of light surrounded by a never ending darkness.

Fujica GW690ii and Yashica-Mat 124G, metered using a dSLR or guesswork. The films were processed in Ilford Ilfotec HC for 6:30 at 1:31 mix before being scanned at home. The dust, especially on the dark pictures, was horrendous!