I’ll write up some sort of summary for my 52 Rolls Project in the next few days. It’s been a bit of a rollercoaster so there’s quite a lot to write about…

Anyway, this week’s update has been three months in the making. Ideally I would have liked to have had the idea to do this at the start of the year and posted a picture that had been exposed for the full duration of the project. As it is, these pictures are from solargraphs installed on the 1st October.

In case you’re not sure what you’re looking at, Solargraphy is a photographic method utilising extremely long exposures and a pinhole camera. They are usually used to show the path of the sun through the sky over a period of time. The cameras are built out of a drinks can and 35mm film canisters with a hole pushed through by a pin, loaded with a piece of photographic paper and weatherproofed with gaffer tape. The paper is burned by the light and so no chemicals are required, just scanning and inverting.

Here’s how they looked installed on the shed and the garden lights. (Leica M6, 35mm Summicron, Kodak Tri-X in Ilfotec HC). 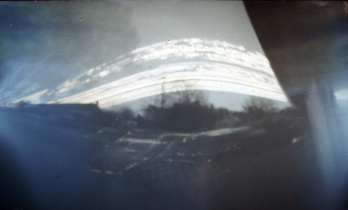 These two were from the film canisters and unless you know the layout of our house, they may take a bit of working out. The one on the left shows trace of a large tree to the left side of the frame that was cut down about a month into the exposure. That’s why it’s even more ghostlike than the rest. The lighter streaks in the central foreground are our cars coming and going.

The last one, used a different paper (taken in the Guinness can using a 7×5″ sheet of Kentmere VC Select) and so has responded differently, with a green tinge (actually orange before inversion. I think that the can may have been damp when it was sealed up). Each of those sun trails shows the path of the sun over 90-odd days, getting lower in the sky each day until 21st December – people often expose solargraphs from solstice to solstice so that the sun travels from it’s lowest to highest (or the opposite) during the exposure.

My previous posts on 52Rolls are HERE.