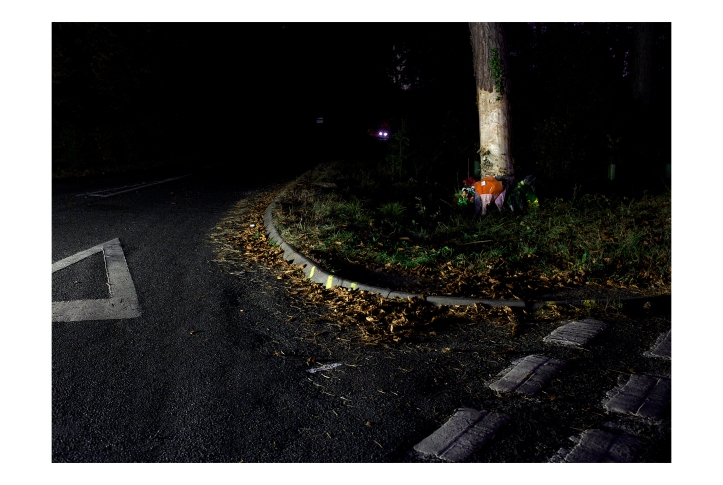 I had mixed feelings about taking and subsequently posting this picture.Early on Saturday morning, I read on my Twitter feed that there had been a fatal collision in our village during the night. It was Monday afternoon before I passed by and saw the site of the accident. It transpires that a car had left the road on a bend and hit a tree, killing the driver, a local 19 year old man.
It’s a junction that I’ve photographed previously and I was drawn to taking a picture again while the evidence of the crash was still apparent – the tree that the car hit has been stripped of bark to about 8 feet from the ground with deep scars in the trunk and there’s a darkened patch of grass where the car came to rest. Also, the first floral tributes were beginning to be placed at the foot of the tree.

I wanted to shoot the scene as part of my ongoing night-time series and so I went back at 8pm on Monday evening, unsure how I would feel about taking a picture. At this time of year, it’s dark at that time and cloud cover meant that the only light was from the newly installed traffic bollard and the city’s light pollution. As I set up the tripod, I worried about that a passing driver, or worse still, a relative of the dead man, might stop and ask why I was taking a picture of the scene.

I questioned my own motivations for being there. Was I being disrespectful? Or exploitative? Or ghoulish? Would I feel more comfortable if it was just a straight-up, daytime snap of the scene? Once again, I was exploring the limits of my own photographic comfort zone and that has to be a good thing.

People who indulge themselves in photography or art don’t make good photographers or artists. A photographer must be a solitary person. For example, when someone dies, when a woman is crying, or in a moment of great passion, a photographer must be able to hold the camera and take pictures. As a result, I face the problem of being called inhuman or cold-hearted. That’s the hard part. Arākī