Vivian Maier – The discovery of a photographer

For our summer holiday this year, we traveled by car to my mother-in-law’s in Poland. Rather than driving straight through as we have in the past, we decided to enjoy the journey and break it up with stops in Bruges, Detmold and Berlin. After a day in the stunning city of Bruges and an evening meal, we stopped for one last beer (Tripel Karmeliet since you asked) in a traveller’s bar attached to a hostel. The inside was not quite as impressive as the exterior and after drinking up quickly, we went downstairs to the ‘facilities’. The basement was dark, dripping and smelt foul. As I held my breath and walked back towards the stairs, one of the posters that covered every surface (that wasn’t graffiti-ed with English swear words) caught my eye…

After reading so much about Vivian Maier recently, watching the film, buying a book and writing a blog post, it seemed almost too good to be true to have the opportunity to see an exhibition of her work. It was only a slight diversion from our route and ended the following day – the stars had somehow aligned.

The exhibition was held in Saint Peter’s Abbey (Sint-Pietersabdij) in Gent’s main square. It was an impressive setting for a fine looking show featuring 120 photographs from the Maloof collection and curated by Anne  Morin of diCHromA Photography, a company that specialises in travelling photographic shows such as this. Much of the work was familiar from my online research and the ‘Street Photographer’ book, with one or two exceptions. As usual however, photographs look better and are easier to engage with when printed.

Considering the work again, it is clear that Maier had an excellent eye for the small details that often make a photograph, such as the young girl with the dirty face. The photograph is an interesting enough portrait, but add the huge watch that she wears and it invites us to ask questions about where she got the watch, does it work and can she use it?

This photograph is also one of many featuring children. She was obviously comfortable with them and they appear to be with her, probably because of her professional skills as a nanny. She may also have had the children in her care with her when she was taking pictures of children on the street – this always makes this situation easier, although some of today’s issues regarding photography of children were less prevalent in the 1960s when these were taken.

This same photograph is also an example of another common feature of Maier’s work. Because she took these portraits and candids using a TLR, the subject is usually looking at the photographer rather than the camera. Another example was one of the largest prints in the exhibition – larger than life size – and shows how the subjects can look distant or distracted because of this alignment. 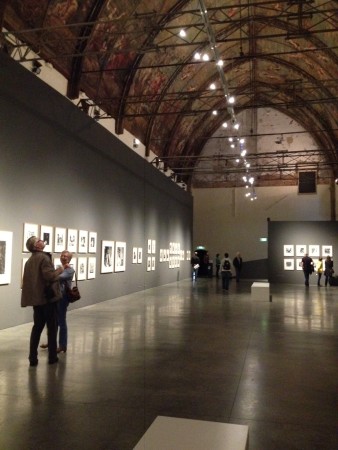 Along with her opportunist snapshots, we see examples of her ‘waited’ photographs where she has found an interesting feature, background or reflective surface, and has waited for a suitable subject to enter the frame. This is a technique often used by street photographers and is repeated here several times.

Another learning point is the inclusion of images that are not perfect (there is movement blur or similar technical error) but that have a redeeming feature. There is something about them that makes the picture worth showing, a look to the camera or serendipitous composition.

As with all collections of Maier’s work, there were a large number of self-portraits. While a few of these are creative, many are the fairly standard pictures we take when new to photography. My feeling is that when faced with 150,000 negatives to curate, these were the easiest to seperate and create a collection or book from. It feels like lazy editing and I can’t imagine that Maier world have wanted to be know for this work above her more interesting subjects.

When viewed as a whole, the black and white, square format Rolleiflex images from the early part of Maier’s catalogue (I nearly wrote career) provide a documentary feel for Chicago and the wider USA in the 1950s and ’60. Like the best photography, we can feel the sun on our face, the wind in our hair and smell the city in the images.

In what appeared to be an after-thought, a small corridor contained a small selection of Maier’s colour work from the 1970s and 80, shot on a Leica 3 (and so 3:2 rather than square). From this tiny sample size, it appears that her self-taught skills adapted to the use of colour while keeping her keen eye.

Finally, 3 small screens showed brief, looped films made from the 8mm and 16mm film stock that was also found in her archive. Little effort has been made to edit the film, indeed, leaders have been left to run in the videos, adding to the ‘thrown together’ feel. From what we can see, Maier appears to have filmed similar things to those she photographed; people in the streets, the children in her care and local event such as the aftermath of a car crash, or the damage left by a hurricane.

Despite my reservations about the way in which Vivian Maier’s work is being marketed and presented to the world, it is an enjoyable exhibition, which, apart from a few ‘clunkers’ contains many excellent photographs and gives a feel for her work – or at least, John Maloof’s version of it. It was a show I was destined to see, and I’m glad that I made the effort to do so.