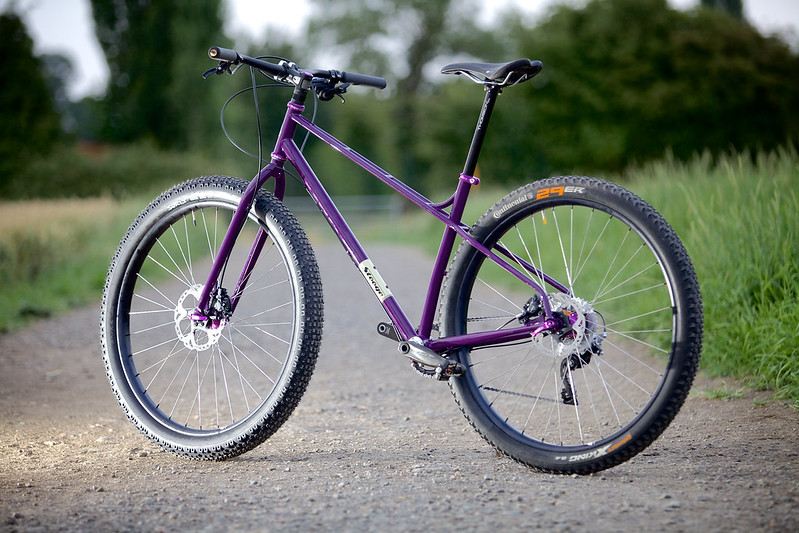 A couple of months back, I announced to my mountain biking buddies that m…a…y…b…e the time had come to think about getting a bike with gears. It followed a trip to Skye that had got me thinking that if I’d wanted to ride while I was there, I would have struggled, owning only singlespeeds.

But Truth is, I’m getting old!

Anyway, those buddies soon offered me a selection of links to all kinds of machine, ranging from daft, full-suss armchairs to choice Canadian dream bikes. But one of those links I received was this: http://stoogecycles.co.uk/

While the website left a bit to be desired, the frame was stunning. Just the sort of thing that appeals to me being a little ‘niche’, great to look at but above all, well thought out by a rider who had a similar attitude to riding as me. Reading the story of how Andy had come up with the design and his interview on Bear Bones Bikepacking, his thoughts on how a 29er should handle struck a chord. (You can read more of the same on the ever-growing Singletrack thread too). 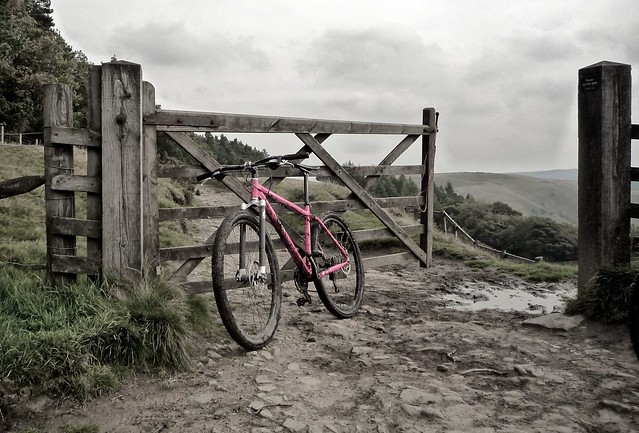 I was something of an early adopter of 29ers. Back in March 2010, I wrote this about an On-One Scandal I’d been loaned to take pictures of. I just about loved it, but had reservations about the stretched out position and the effect that position had on handling. And, being aluminium, it was never going to be a bike that was more than just a tool. 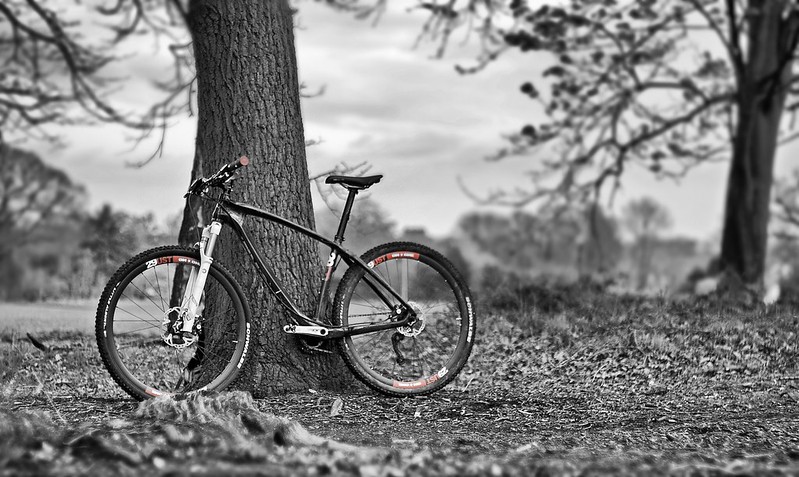 A year later I was riding what is still one of the best looking bikes I ever had, an On-One 29er Race. As the name suggests, that was all about going quickly and again, putting the 29er benefits to use for straight-line speed, rather than all round rideability. Then it snapped. 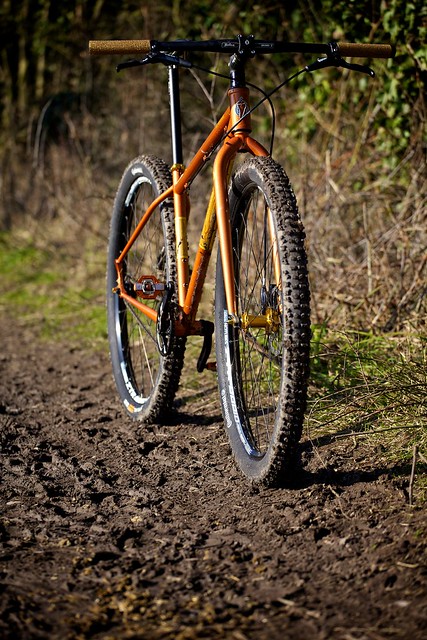 These bikes had not been my choice, I’d just been fortunate enough to get to ride them for a while, while I photographed them. But last year I bought the beautiful Salsa El Mariachi singlespeed. It had the looks, the wonderfully reactive steel frame and, once I’d almost halved the stem length, a position and ride that suited the trails I enjoy most – tight and twisty with hard accelerations and late-braking and the occasional huck.

But it was a singlespeed, and, while I may lose a few followers with this attitude, there comes a time for everyone… The ‘wear and tear’ that grinding that gear up the last climb of a nightride was causing was taking longer to recover from. Where once I’d ride hard in the evening before commuting 8 hours later on a fixed-gear, I was finding excuses not to. The snooze button was winning too often.

And so to gears. The boom in ‘one-by’ seemed to be nicely timed and the simplicity of such a set-up appealed. So the frame and gearing were decided on, that just left the wheel size. The Stooge fork, like that on the Salsa, gobbles up a 29+ tyre with its 3″ girth. More research, more opinions and maybe a little coin-tossing and the decision was made.

To make sure, the weekend after the first batch of frames were delivered to the UK, I went across to mid-Wales for a weekend and met-up with Andy to ride his demo bike around the Llandegla trail centre where he worked. After a lap of the full red/black route on my Salsa, I’d got my eye in and was flying. The bike felt perfect and the Stooge had a tough act to follow.

Andy had the demo bike set-up with flat pedals, a layback post and a Knard up front on a rim that looked way too skinny. What was obvious though was how good it looked. The finish was excellent and the aqua colour really stood out amongst the trail centre crowds.

After a lap, I was back with Andy and soon had a frame in each hand; one purple, one aqua. I probably stood there for longer than was appropriate, but they were both sooo nice. As I stood there deliberating (and deliberating some more), Andy told me the story of how he had chosen the ‘Plum Crazy’ purple colour. He has a book on American muscle cars. In it is a 1970 Plymouth Roadrunner in a colour with that name. He saw it, loved it and decided to have 20 frames made in that colour. It’s the sort of story that I’m a complete sucker for. The decision was made and it was only on the journey home, the frame winking at me in the rear-view, that I began to wonder what colour components suit a purple frame. 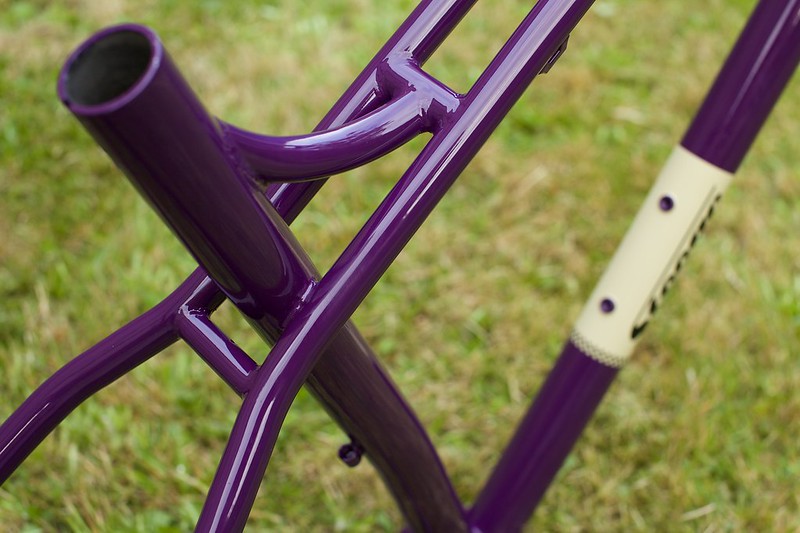 A really handy Russian bmx painting app helped answer that and a few days later, the list of components was complete and sent off up to Tim at Sideways. In the meantime, the frame took up residency on my mantelpiece – it was too pretty to languish in the shed. 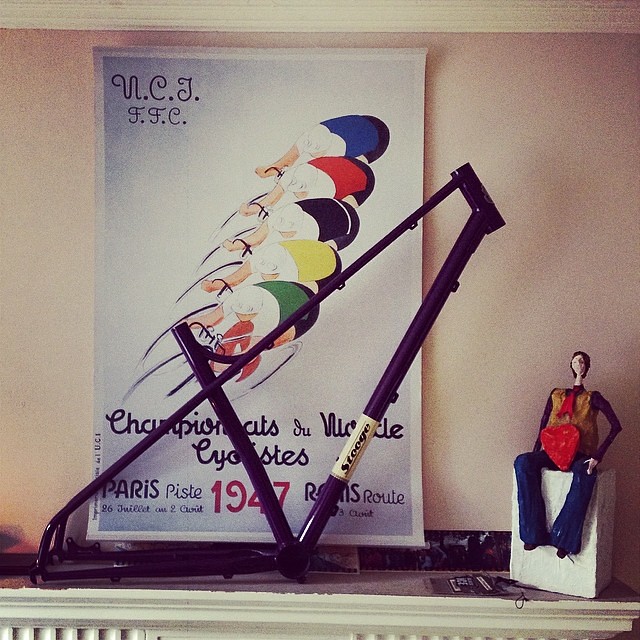 Too long later, everything had arrived, the wheels had been built and I was off up to Alsager to collect. An afternoon in the yard with that winning combination of spanners and beer and it was built. 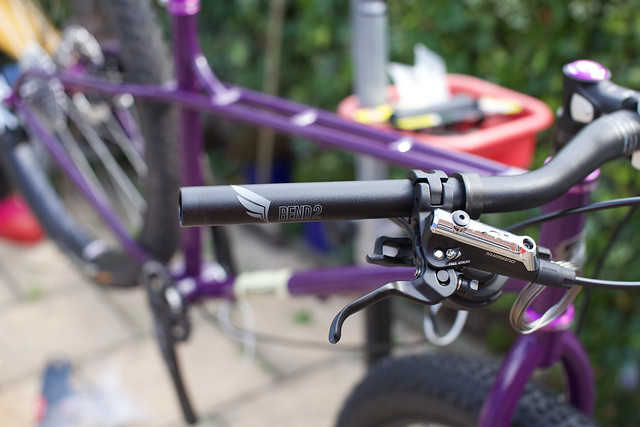 Purple on purple works as well as I’d have liked. OK, so gold may have been better, but for 2014, Hope dropped gold hubs in favour of purple, so who am I to argue? 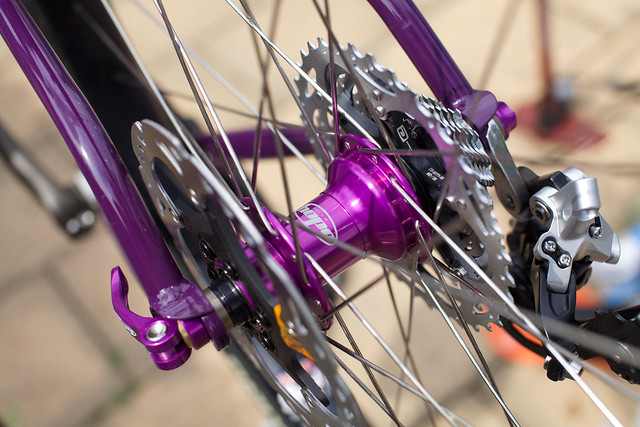 And so to the ride. Well, even through the rose-tinted haze of that first ride, I knew the bike was everything I’d hoped it might be. The components, a mix of Shimano XT, Hope and Thomson all did what you’d expect and performed flawlessly, allowing me to concentrate on the ride.

The position is much more upright than those previous racy frames with their long tubes. I followed Andy’s lead and left plenty of spacers under the stem (35mm to be precise) and it raises the front end to a height that solves the issue I always had with 29ers. While the big wheels were able to roll over most kerb-sized trail obstacles, anything larger than that might cause problems because of the stretched out position and the difficulty that can cause when trying to lift the front end, with rider weight is so far forwards. 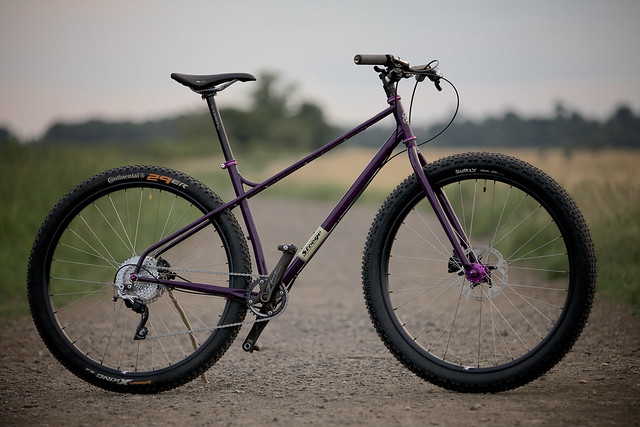 I specced Velocity Dually rims with a 3″ Surly Knard up front (WIZARD SPEAK KNOWLEDGE BOMB PUT THE TIRE DOWN AND PICK UP A BEER). With a bit of tweaking, 12-14psi seems to be the magic number for me. Less than that and things are a little squirmy. As for the Knard’s wet root phobia, I’ll let you know. Right from the off though, that soft, fat tyre smoothes out anything upto an inch. Roots, stones and trail chatter just disappear. Running soft means that the contact patch size is large enough to maximise grip, despite a shallow tread pattern, without becoming impossibly draggy.
The 39mm internal section of the rims opens up the 2.4″ Conti X-King on the back to a size that the designer probably had in mind. The edge nobs on the tyres are presented at an angle to the trail that means they’ll actually be used when cornering. It fits in the rear of the frame with 7mm+ in all directions – more than enough.

Obviously, different bikes suit different riding, but for me and mine, I don’t need more than this. Some riders (including the younger me) prefer the dumbed-down experience of the full-suss, skill compensator that averages out the trail. But when riding the Stooge, the slack angles and that short, high front, combined with those chainstays (more than an inch shorter than the Salsa), result in a super-engaging ride, that responds to rider input and effort. It’s easy to move your weight around the bike to get the best from it.

Riders that still ride rigid probably do so for one of two reasons. Either they’re poor, or they have an aversion to over-complicating things. I could use suspension but I don’t really need it for most of the riding I do, assuming that I want to RIDE the bike rather than just steer it down the trails. Riding mountain bikes for me is about controlling the machine with body-weight, skill and accuracy not just point and pedal. And for that reason, the Stooge is my kind of bike. 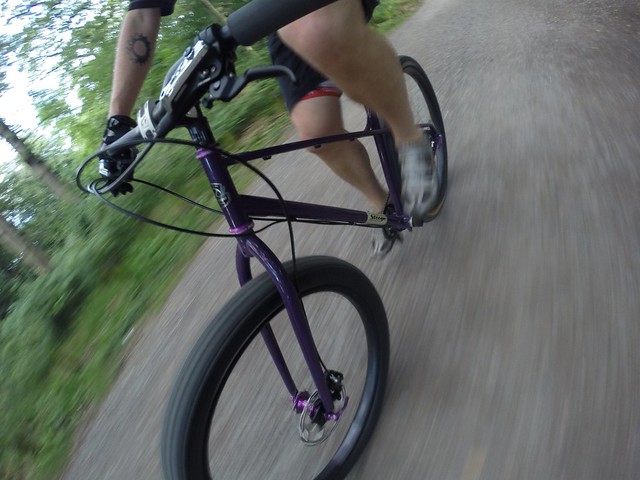 The only things I’d change are the EBB (after Salsa’s Alternators, any other solution is just messy and heavy) and the gusset on top of the top tubes at the headtube. Given the quality of the brazing across the rest of the frame, it lets things down a little.

So anyway, thanks to Andy. Hats off to you for going beyond the dreaming that many of us have done and actually creating a bike to suit YOUR vision of how things should be.
And thanks to Tim for sorting the bits and a bullet-proof pair of wheels.