This exercise further reinforces the different colours of daylight.

Subjects lit directly by the sun in the middle of the day are lit with a pure, clear light as the full spectrum of light colours is reaching us. Closer to the horizon, the sun needs to pass through oxygen, nitrogen, water vapours and other particles that form a thicker atmosphere closer to the earth. These obstacles block out the light of shorter wavelengths, meaning that only the longer reds, oranges and yellows make it through meaning a warmer light and colourful sunsets. In extreme cases of pollution (in cities or volcanic dust clouds), only the longest, red waves will make it and more ‘fiery’ sunsets are the result.

This effect means that colours photographed at the ends of the day, when the sun is low, will have this orange cast, of varying strength. Photographs at this time of day are usually left uncorrected, as the orange appearance of a sunset is attractive to many people. Our subconcious also informs us as to the time of day that a picture was taken because of our inate understanding of these effects.

At other times of the day and when subjects are not lit directly by the sun, the effect is very different. When cloud blocks the path of light between the sun and the subject, it scatters the light causing it to strike the subject from many angles at the same time and the sun becomes a low-contrast light source. The clouds effectively become a huge diffuser to break up the direct lighting that the sun provides. The lighting remains ‘white’ because the spectrum is equally affected.

Clouds can also become reflectors. White clouds on a sunny day will not only diffuse the light if between the sun and the subject, but they’ll also reflect light back from other angles to add light and soften shadows.

In shade on a sunny day a third effect will occur – the blue sky will become a brighter light source (a very large, low-contrast one) than the obstructed sun and the subject will have a cooler look. The sky’s colour is due to the shorter wavelength, bluer light being absorbed and then radiated or scattered  by the thinner atmosphere above us. 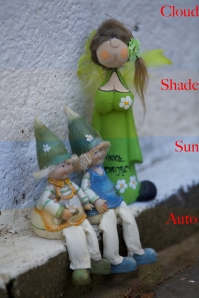 Our cameras do their best to correct these differences (and those caused by coloured light sources which we’ll come onto later) by finding the lightest areas of a scene and assuming that they are white. Looking across the examples above, the camera’s Auto White Balance setting has done a decent job of making the colours the same across the various lighting  situations. It has been confused a little in the shade set by the white wall behind the figures.

As the camera expects a subject in shade to be bluer than in other lighting, that setting produces the picture in each set that appears the warmest (or most orange) as it tries to compensate.

In my first post on this blog, I discovered the power of custom white balance and its ability to fine tune this correction. While we can let the camera correct white balance, or when shooting RAW correct later in software, as with most things it’s best to get it right in camera.