A while back, I wrote about putting together my first ‘zine. It was a collection of the photographs that Wojtek, Pavel and I had shown as part of our No Constructive Conclusions shows. While it contained six pictures from each of us, the others had given me free reign to design, produce and distribute this printed version.

I loved the whole experience, especially the buzz of people getting in touch and asking for copies. The first run of 25 went in a couple of days and I now have only a couple left from a further order of 20. They went out across the UK, Europe and to the USA.

Feedback was great. People liked the work, but also the format and quality of the zine itself. It even got a really nice write-up from James Cockroft that you can see here. I had quite a few questions on the process from people interested in putting their own work out in physical form.It feels like it played a tiny part in what seems to be an increased interest in such booklets (‘zine’ is so much more cool that ‘booklet’ isn’t it?) among the Twitter film photography community. I hope that even if those 40-odd people that got a copy didn’t like the photographs that it contained, it at least sparked their imagination and got them thinking about how they might create their own.

My contribution to No Constructive Conclusions had been shot a couple of years ago, on a digital camera, and processed in a way that when I look at it now, is not really to my taste. This meant that while I’m still proud of the work and delighted to have been involved in the project and subsequent exhibitions, I was keen to do a similar zine that was more me.

If you’ve ever been around this blog or my Flickr feed before, you’ll know that I have a thing for Fujifilm’s Neopan Acros film, particularly when used at night. The film suffers no reciprocity failure during exposures of upto a couple of minutes, meaning less maths and more time to think about the picture. Blacks are truly black and their seems to be an infinite range of greys.

I’ve posted some of my results on Twitter and had heard from a couple of other film photographers about having been interested enough by my results to go a try the same sort of thing with Acros. Among them, Dan Smith tried shooting a roll and got fantastic results right from the off and to be honest, I was envious that someone else had got so close to ‘my’ look straight away. When he ordered a copy of my first ‘zine, an idea hatched for the second project; perhaps he and I could collaborate on a collection of our nighttime, Neopan work. We’d both shot on TLRs (him a Rolleiflex, me a Yashica) using the same film and when viewed together in the Nighttime Neopan Flickr group, looked nicely consistent.

I had an idea that I wanted to print a collection of the work on matt black paper, meaning that the greys and whites of each image faded into the surrounding darkness; the viewer would need to squint, to let their eyes adjust to reveal the scene. I looked around for anything similar and found David Nissen’s ‘Deep Night’ which had a couple of pages presented in this way. I ordered a copy and loved it. It was an idea worth pursuing. 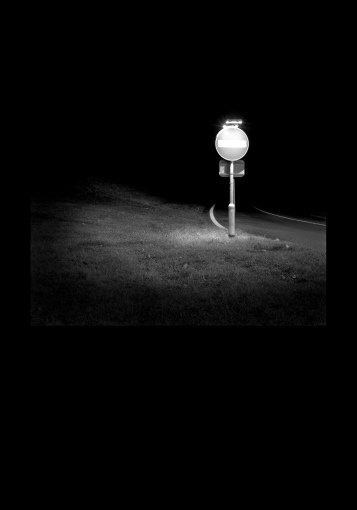 I was also keen to print in portrait format so that it handled like the old football/music fanzines that I’d screw up and put in the back pocket of my ’80s jeans on the way home from the game/gig.

For the first ‘zine, I uploaded the images, tweaked the layout and ordered it, all on the same day. For this one, I contacted the Mixam team to ask the best way get the look that I was after. They suggested printing in colour (rather than greyscale) for the best looking blacks, along with other advice on file formats etc (only some of which I paid attention to). Despite the order being very modest, it was great customer service and one that I’d recommend if you’re planning on doing something similar – best to ask before you order.

And so, having checked the artwork repeatedly, and shared the preview with Dan, it was time to place the order. I was out of the UK at the time and decided to schedule the delivery for my first day back home, so that I could get on with distributing them as soon as I got back. Perhaps I got a bit carried away, but I went ahead and told Twitter the news.

Zine #2, ‘Nighttime Adventures in Neopan’ is at the printers & due at the start of next week.
It’s a collaboration between @DanSmith74 & I and as you might’ve guessed, is shot entirely on Neopan Acros (using TLRs).

A few days later and even though it still hasn’t arrived yet, all but four copies are accounted for! I really hope that it’s as good as I want it to be, there are no speeling mistakes and it that Dan is happy with it.

While it’s no substitute for a printed, physical thing, you can see a preview of the artwork here. If you’d like a copy then let me know here or via Twitter and if there’s enough interest, I’ll order another run.

Next up, I’m looking for other people to collaborate with on future projects. I have a couple lined up so far, but would love to hear from anyone interested in putting something out together…

Get a copy in my brand new Etsy shop using the link above.