Yesterday, I took a drive around the Burren in the north of County Clare. It’s one of Ireland’s six national parks and is dominated by a karst landscape – limestone rock that has twisted and buckled as it has been pushed into the shelf of Galway granite to the north. The high plateau of bare, grey rock drops away to the Atlantic coast and is skirted by the Wild Atlantic Way that runs from the entire length of the western coast.

It’s a spectacular area and every time I’ve visited, I’ve vowed to come more often. I travelled up with my Mamiya film camera, but it stayed in the bag for most of the day as I enjoyed the simplicity of shooting digital for a change.

The Poulnabrone dolman, a megalithic portal tomb. This thing has been around for three thousand years, so shooting a long-exposure (8 seconds) seemed fitting.

Dropping down the towards Fanore. Everything in rural Ireland seems to run overground, meaning that these poles and wires are ubiquitous. I like to include them in photographs as they give a sense of connection. While there are no people in the pictures, there’s someone on the end of the wires.

Fanore Beach on the first day of February. It was mild and there was weak winter sunshine doing its best. A break in the showers saw a couple of groups of people leave the sanctuary of their cars and head for a quick paddle in the Atlantic. The wind was blowing a spray off the waves and over the coastline.

One of those showers.
Again, I like to include the rain drops on the windscreen in these pictures as it changes the photograph from an anonymous view to MY outlook on a scene. You are sitting alongside me, wondering when we’ll set-off again and get to the cafe. 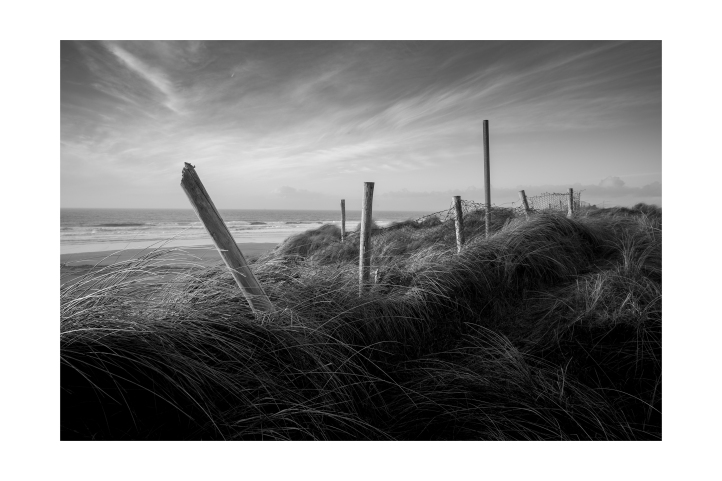 Posts in the dunes on Fanore beach, shot with the new-ish Voigtlander 21mm. I’m really enjoying the results from this lens. Picture 1, 4 and 6 in this post were taking with it – my three favourites.

Gubbins:
Leica M Monochrom (the M9 version, not the new on that costs seven and a half grand!), Voigtlander 21mm f/3.5 VM Color-Skopar or Carl Zeiss 50mm f/1.5 Sonnar.