Since We Fell Apart I’ve Been Nothing But Blue…

I don’t own my own home. I was married in a town hall. I don’t really support a sports team. As a result, I have no real affinity to any particular building. I can appreciate them just for how they look.

I have never been ill in Kalisz. If I had, then my favourite building might be different.

A couple of weeks ago, while we were in Poland, Gosia needed to go to Kalisz. The oldest city in Poland and the only place that she could go to get a new passport in Wielkopolska (Greater Poland). While she was in the passport office, I would have half an hour to rush around the town and get some pictures. As usual, I did a little research and came across this photo by Dirk from Bremen.

Having spent too long in recent months in the company of concrete fetishist Iain Photofinale, I was taken by the unrelenting greyness of the place, even on the sunny day in the picture. It also appeared to be round.
It had to be worth a look…
It turned out to be a little way out of town and so after the formalities, we drove to the hospital on our way home. As soon as it came into view, it was obvious that Kalisz Hospital (or Szpital, my favourite Polish word) had had a makeover.

It was minus 9 and the air was sparklingly clear. The low winter sun was reflecting of the orange and salmon cladding that had transformed the greyness into the glorious fruit Polo you see above.
I left my wife and mother-in-law in the car and set off to take a few pictures.

Since I first saw it, I’d wondered if, like those fruit Polos, it had a hole. I headed up to the main entrance but after pressing my nose against the glass and seeing the busy reception area, decided my Polish wasn’t good enough to be wandering alone in a hospital and I bottled it.
There was a level below the main doors, so I went for a nosey down there. It was A+E (the queue of ambulances gave it away), an even dafter place for an English bloke with a camera to be.
I had to try, so I went for a jog around the outside of the building, keeping in mind that my family were sat in the car, in -9, directly and squarely in front of the Absolutely No Parking sign.
Sure enough, this building was as good as I’d dared hoped. There was a service tunnel under the building and at the other end…. daylight!

I walked though and into the perfectly circular yard at the centre. Looking up and around it was crazy. A thousand windows and almost completely symmetrical.
In the distance, I could hear the sound of a horn beeping, and possibly the roar of a tow-truck, but I had to hang around. This place was amazing. Like nothing I’ve seen before. It was also spotlessly clean. I can’t think how such a place would look in England.
In the middle was a huge, multi-jetted fountain that because of the temperatures (I’m guessing) was dry. Despite wanting to get the most symmetrical picture I could, I didn’t risk climbing over the wall and into the dry pool.
It felt like the whole population was looking in on this central area and the loon trying to photograph it. In my imagination, that included the man standing next to the large valve that turned on the fountains. And I knew that if I were him and saw the man with the camera climbing into the firing line of all of those water jets, I wouldn’t resist the temptation… 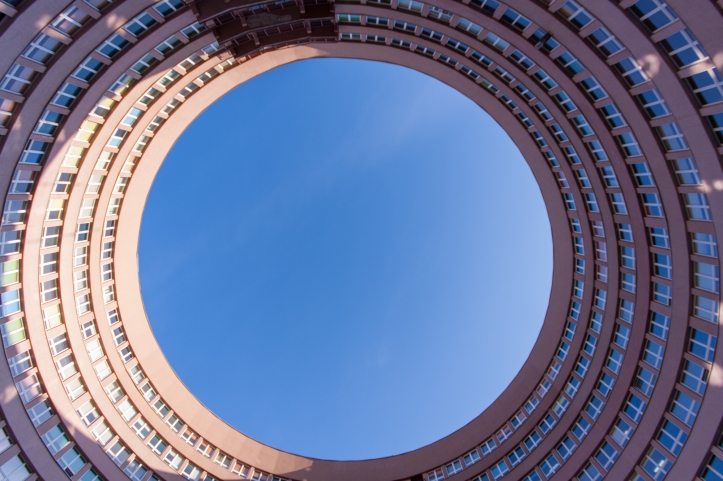 So instead, I lay on my back on that wall and looked straight up.