Walking with the Pilgrims: Grabarka

You’ll have read in previous posts about my ongoing exploration into faith and pilgrimage in Poland and back home in Ireland. It’s a project that has been influenced more recently by Alys Tomlinson’s work Ex-Voto and in both the last post and this, I visited sites that I’d discovered through her book.

As is the case every second year, we were in Poland for Christmas, and as usual, while my wife spends time catching up with her friends and family, I rent a car and set off to explore the country. On this occasion, I drove to Warsaw, Poland’s beautiful and endlessly fascinating capital city to spend the night. An earlyish start the next day, and a couple of hours later I’d be close to the Belarusian border at the holy mountain of Grabarka. 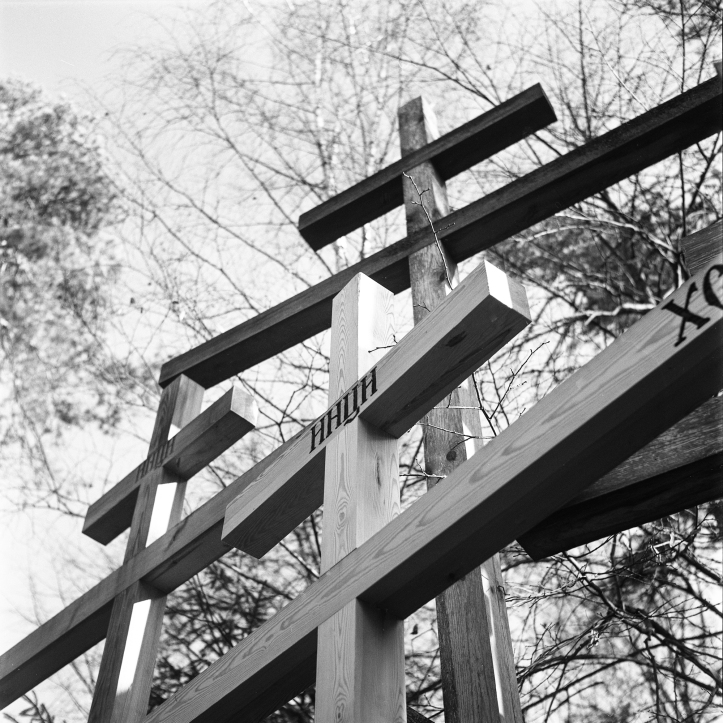 Unlike the previous, Catholic pilgrimage sites that I’ve visited in Poland and Ireland, Grabarka is Orthodox Christian, a religion followed by less than 5% of Poles, but more popular further east.
In 1710, a local man received a vision that he should lead members of his community that were suffering a cholera outbreak to the hill and that they should build a cross and pray for salvation, before washing themselves in the stream at the foot of the hill. They did this and, sure enough, were cured.

This legend has grown and now each year on August 18th and 19th, the days of the Orthodox Church’s Feast of Transfiguration, over 10,000 pilgrims make their way to the hill where they climb the steps to pray and sit up for night-long vigils. Those who seek to be healed or cured carry crosses which are blessed by priests and then put into the ground surrounding the small chapel on the top.

None of these crosses are ever removed and as a result, tens of thousands of them are placed around the hilltop chapel, many of them ‘returning to nature’ as they rot away. They range from lolly sticks tied with string, through to ornate stainless steel structures, several meters high that have been concreted into the ground. Many people carry offerings (ex-voto) or letters containing prayers to leave on the hill. The rosaries, figures of Mary or Jesus or handwritten letters are attached to or hung from the crosses and trees.

By the stream at the base of the hill is a bucket containing the bloody bandages of pilgrims that have washed themselves in this water, hoping for a cure (a note on the bucket of soiled rags asks people not to hang them from the surrounding trees!). There’s also a pump so that people can draw water from this stream (although it didn’t appear to be upstream from the washing place) and take this magical water home with them. 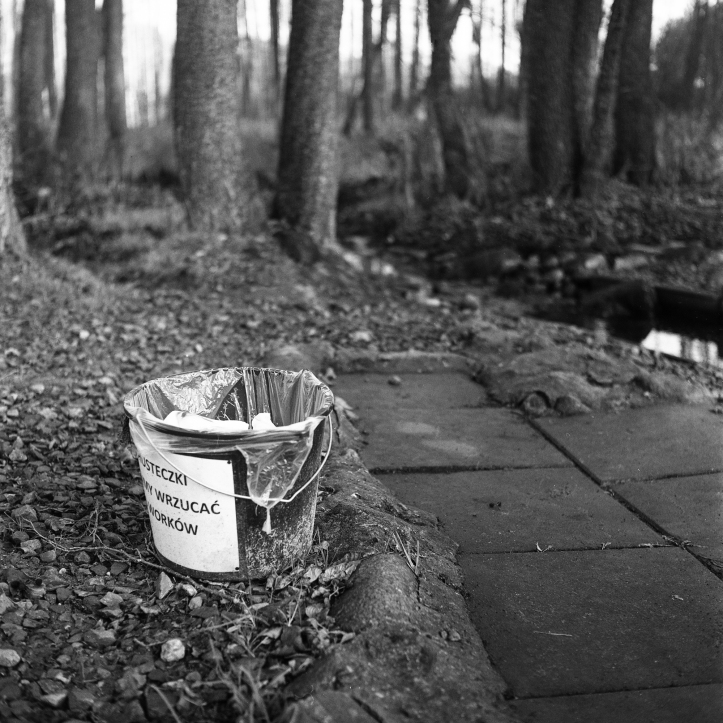 Grabarkais one of a string of holy sites along the Podlaski Szlak Sakralny (the Podlaski Holy Trail), including the nearby spring at Radziwiłłówka. Here, it is said that a church was swallowed up by the ground and that the spring water from that hole has similar healing powers to that at Grabarka. It was an eerie place, tucked away in the woods with just a line of crosses above a damp despression in the ground, with cups and jugs hanging from trees for the faithful to wash themselves with.

Finally, I wanted to travel to the Belarusian border and see ‘Russia’ for the first time. Google maps showed me to a place that was 100m or so from the frontier and where stood a magnificent (bright blue) wooden church (Cerkiew pw. Matki Bożej Wszystkich
Strapionych Radość). As at the previous two stops, I didn’t see another sole as I explored.

Gubbins:
These pictures were taken with a Yashica-MAT 124G, loaded with Ilford FP4+ film. Being Poland in the winter (I was there on the shortest day of the year), there was very little light. I’d forgotten my tripod and so had to rely on holding the camera steady at 1/30th of a second and f/3.5 – it really is that dark even in the middle of the day. My next post will be the digital, colour pictures from the day…