Last weekend, David Samuel Allen esq. joined the Viewfinder Viking Podcast for the second part of our exploration of his photographic practice, and unlike the previous week, I was able to join in the fun.

Dave is a really entertaining guy and has a great deal of strong opinions, about photography and life in general, many of which we share. A quick look at his website will show you a range of styles and techniques that reflect the personality of someone who studied tropical geometry (go ahead, give that link a try…), made a living teaching abstract mathematics and has brought this technical yet imaginative approach to solving photographic challenges. There are no pretty, colourful scenes here shot in a single, digital image. Instead, there are multi-exposures, redscales and clever darkroom techniques.
And these are just the projects that have reached fruition. Dave has previously explained that he sometimes doesn’t actually need to take the picture, so long as he has solved the challenge of how to achieve the aesthetic that he has in mind.

Art is philosophy by other means

You can hear the show by clicking on the picture below or searching Viewfinder Vikings on you favourite place to find podcasts: 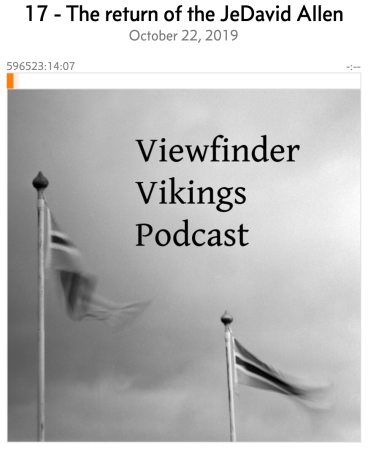 As you’ll hear, we spent much of the episode learning the fascinating story of Dave’s new documentary film One Shot: Inchindown. It’s the tale of his adventure with Simon Riddell to photograph the war time oil storage tanks close to Cromarty in the Scottish Highlands. Being the photographic adventurers that the pair are, taking a picture underground in total darkness wasn’t enough of course; they shot it on a large format film camera before processing and making a huge print of the image in what became the world’s largest darkroom (a process that entertainingly involved four, partially-inflated paddling pools of chemicals and bodily fluids). 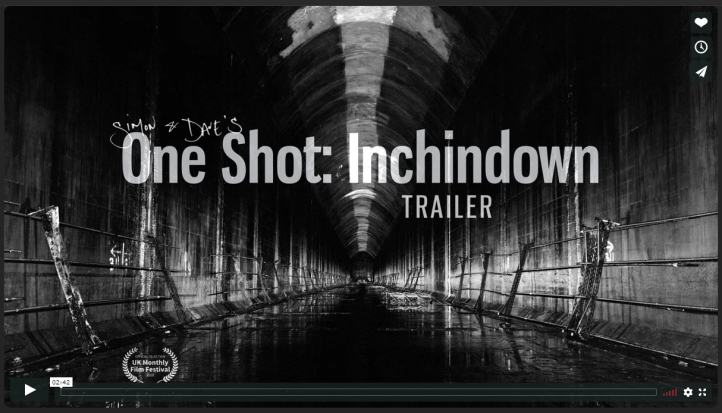 After our chat, Dave was good enough to allow Svein and I to see a ‘screener’ copy of the film ahead of its premier in Inverness next month, and wider release in December. Despite its seemingly niche appeal, the film works really well and will be entertaining for anyone with an interest in photography, the second world war or the human condition. Both Dave and Simon are entertaining characters and together, form a double-act that you can’t help rooting for as they face challenge after challenge.

The narrative of the film assumes no prior knowledge and helps us through the highs and lows of the project. There’s an initial set-up that involves us seeing the results of their first adventure together; we get to know them as individuals before we are introduced to the tanks and the challenge of what they’re trying to achieve. Finally, we follow the ups and down of the project’s execution and hear a little about what might be next.

Dave used to run a video production company and, due to their cameraman letting them down the night before, had to film and produce One Shot: Inchindown himself; and he does a pretty slick job. A technique used during the early stages of the film is to play in sound recordings of messages that Simon left for Dave, describing his idea while seemingly high on flu remedies. Then snippets of an interview on the Sunny 16 Film Photography Project where the duo talk about their plans are played in and help to set the scene nicely.

While we begin to deal with the craziness of their plan, we get to know the protagonists. An interview with Dave is funny and sweet, as his wife shows a patience and tolerance for his next, bonkers scheme, while Simon’s dialogue is very powerful. He tells the story of the death of his father, and as he speaks, he’s in darkness, lit only by a darkroom safelight. While we cannot see his expression, we feel the emotion as the quiver in his voice becomes more pronounced. It’s a tough watch, but a brilliant piece of film making. 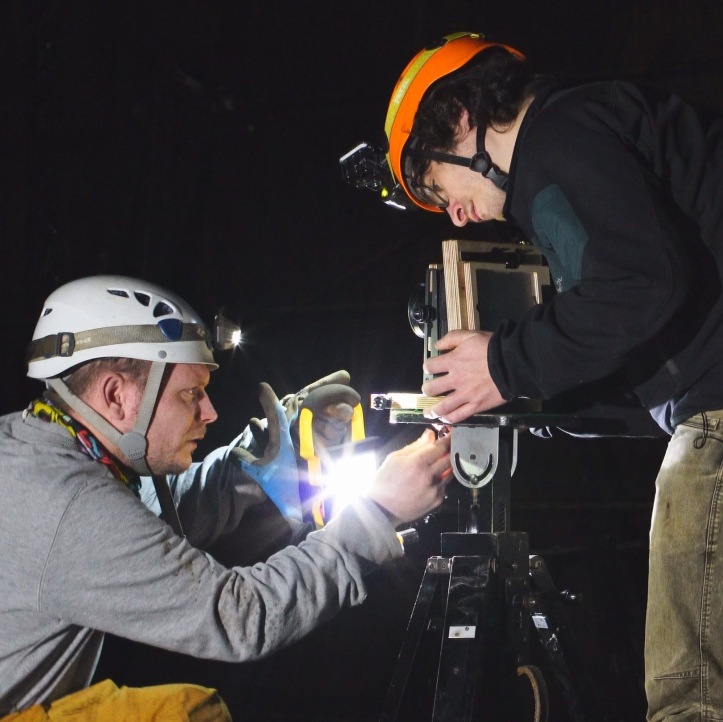 Next, we meet Preston, the keyholder of the facility. He seems to be very conscious of being recorded and sounds like he is putting on his best ‘telephone voice’ for the benefit of the viewer. Preston shows us around the tanks and we begin to realise quite what a challenge our heroes are getting into.

We begin to learn the challenges involved in making such a picture and print on a large-format film camera. Unless you’ve used large format, and understand the many and varied opportunity there are to screw-up each picture taken on the medium, it might not seem quite so difficult. Let me assure you, it isn’t simple in benign conditions, let alone complete darkness and knee deep in ooze.

Throughout, the soundtrack is great. There’s some odd, metallic sounding compositions that seem to fit to the concrete and steel construction of the tanks (and I think were recorded there). Because of their 235m length and 19m height, the tanks provide the longest echo in any man-made structure in the world. This characteristic has been used to great effect for the remainder of the soundtrack when Lucy Treacher‘s beautiful singing voice is recorded in the tanks with reverb like you’ve never heard.

Another favourite part of the film is the conversation that happens in the cafe after David and Simon have surfaced again, and after the picture has been taken and processed. The boys are tired and hAngry, but the exchange gives the best insight into the characters of each. Having spoken with Dave on our podcast and heard him on several others, this seems like him at his most relaxed during the film, and his story about Preston is hilarious.

At the end of the film, there’s a wrap-up that was seems to have been recorded soon after the job was done. It’s a relaxed conclusion and counter to craziness that has gone before. While the print sits behind them as they speak, it gives no clue as to where it was to end up; a question that I’m sure other viewers will be interested in.

The closing credits list the people who helped fund the making of the film and it’s good to see a list of familiar #believeinfilm folks contributed and helped it to happen. They must be very pleased with their contribution.

The guys are currently looking for distribution for the film, and if they can’t find it, it’ll be available online (Vimeo etc.) to rent or buy. In the meantime, four viewings are planned across the UK over the next month or so. Be sure to follow Tanky McOneShot over on Twitter for the latest developments, and if you happen to be involved in local cinema, film distribution or can in any way help this film reach a wider audience, get in touch…