When the new wall planner goes up in the kitchen each January, birthdays are written on first, but they’re soon followed by things like the Waterford Walls Festival. I had such a good time at last year’s edition that I was keen to get back and see more of both the city and the event.

The Waterford Walls festival was celebrating it’s fifth birthday by inviting Irish and international artists to decorate the city’s derelict and forgotten spaces, transforming them with colourful, inspirational public art.

Each year, new murals are created by artists chosen to reflect a cross-section of styles, techniques and themes. The 30+ new pieces are added to the existing murals, meaning that Waterford is now recognised as one of the leading cities in Europe for mural art.

During the festival itself, tours are conducted of some of the sites, and there’s music, drinking and general merriment to be made. Ironically, for the visitor, it’s not the best time to go, as much of the artwork is created during the festival’s long weekend, and so a walk around often visits blank walls or work in progress.
The tours are run for a few weeks after the festival and it probably makes more sense to visit then unless you want to speak with the artists while they’re working. 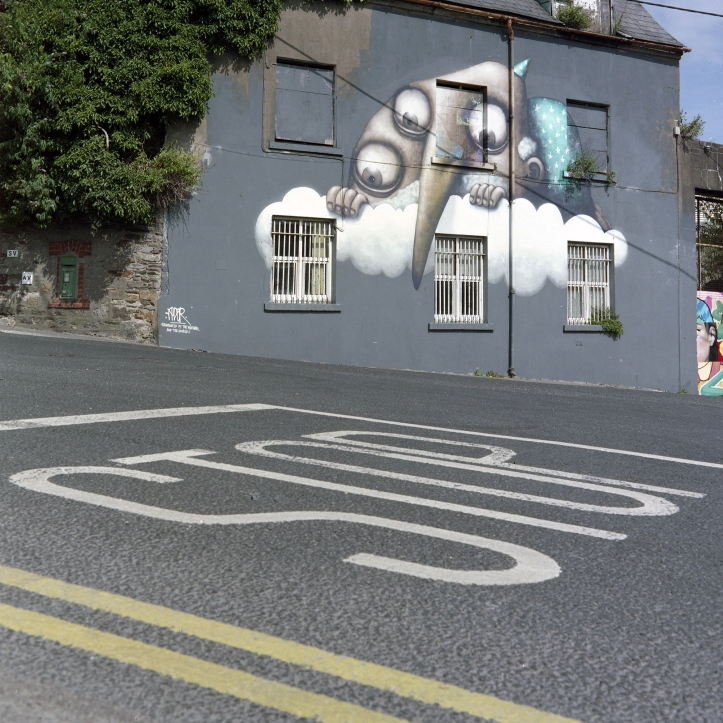 I took these pictures using my Mamiya C330ƒ TLR and some old expired rolls of Fujifilm Pro 160S. What makes them special is that they’re the first rolls of C-41 that I’ve ever processed.

As everyone will tell you, it really is easier than processing black and white*.
That * is the caveat that I was using a sous vide to keep everything at the right temperature. Without this handy gadget, chemicals will get cold much more quickly and that could well affect the performance of the chemicals. With it, the chemicals, tanks and film can all sit and soak at 38°C prior to processing, meaning that during the short developing time (three and a half minutes) nothing is going to get cold too quickly.

While I’ve processed my own black and white films for a few years, C-41 is a process that I’d avoided, less because of the actual developing, but more because scanning colour is such a massive ball-ache. However, on this occasion, the ‘auto’ button on my Epson software behaved itself and gave me pretty good results. I then just corrected the slight colour shifts using the white balance (grey) picker in lightroom.

It seems to me that by using automated software, all of my colour film pictures could end up looking pretty similar and characteristics of different films might be lost. Watch this space to find out as I’ll certainly be processing more colour film in the future.

Smug’s work on Barrack Street is just brilliant. These are a few years old now but still look great. They’re paintings of a fellow mural artist, and one of the organisers of the festival. As is his way, he painted them with what appear to heavy colds, watery eyes, red noses and all. I’ve seen his work in Limerick (now lost), Leicester and Glasgow, and it is always brilliant.

What I also like is that despite these beautiful works of art being on busy, city streets, they’ve not been ‘tagged’ or damaged but remain respected it seems. 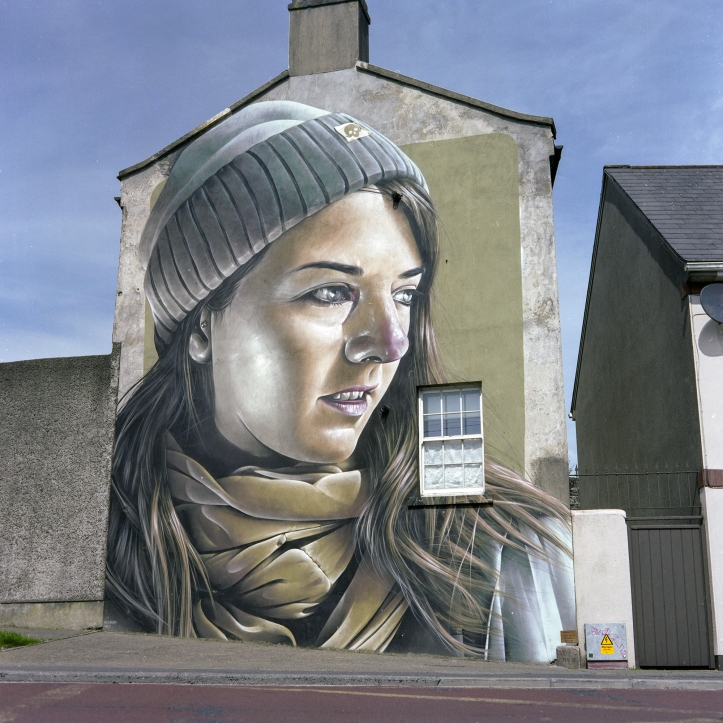 As I’m enjoying doing at the moment, I recorded some audio as I walked around Waterford that might find its way into  our Podcast – The Viewfinder Viking (like and subscribe folks!). Take a listen below and let me know know if you travel places and take pictures while you’re there, or if you go only for the pictures… 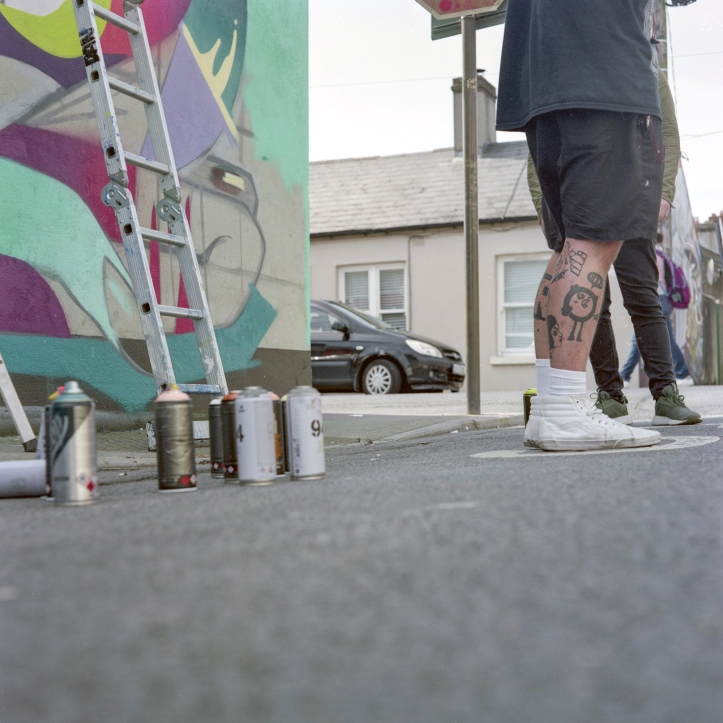 Dan Leo’s legs (Sounds like a Half Man, Half Biscuit tune). 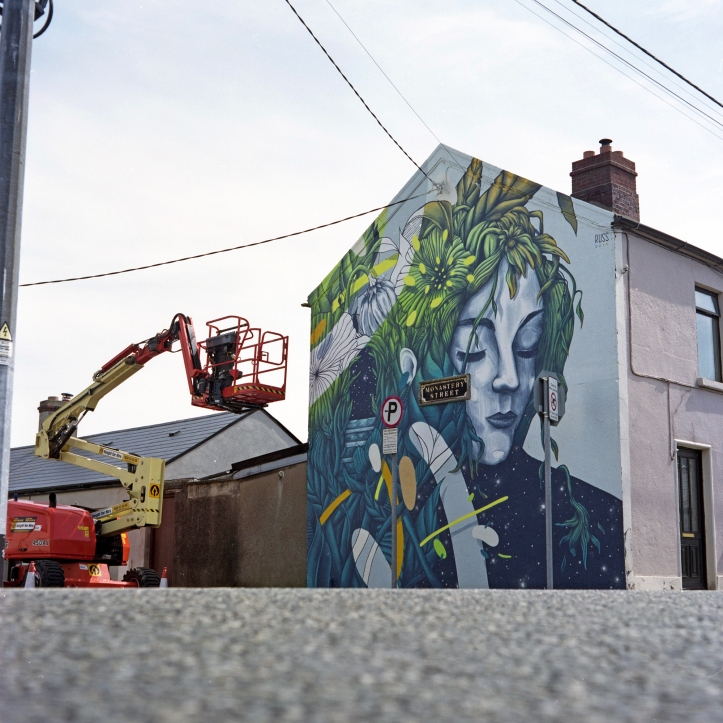 Russ (France) looked to have finished.

KogaOne, also of France, still had work to do. 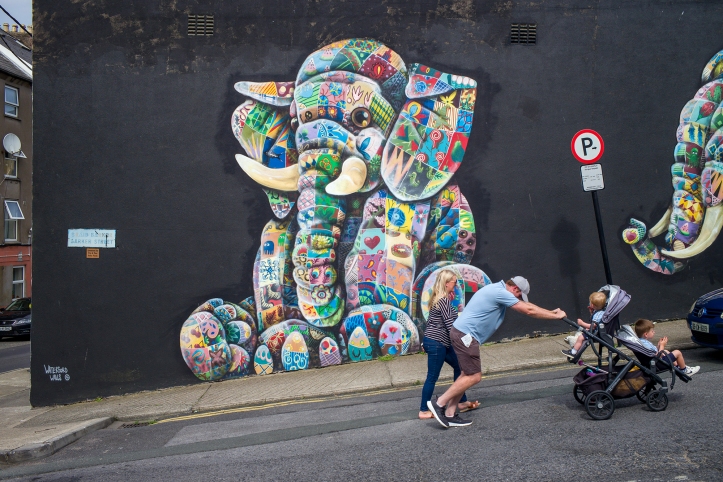