Our Man in Portugal

Four years ago I went to Faro in Portugal. It was February and we only spent a long weekend there, but as usually happens, being on holiday gave me time to think a bit more about taking pictures and the opportunity to get out and shoot.
One day, I was walking around Faro’s old town with my wife and mother-in-law and as we walked past the end of another narrow lane in the labyrinthine area, I saw this character standing on his front door step. Hoping that this opportunity might arise, I stopped and fitted my 50mm lens and selected a wide aperture with thoughts of how his portrait might look already racing through my mind.
A couple of minutes later we returned to his street and to my disappointment he had gone. The ladies had walked on ahead as I nosily looked into the doorway where he had been standing – at which point he appeared and made me jump. Speaking no Portuguese, I waved my camera at him and said something daft like “Photo? OK?” At which he chuckled and adopted a peculiar pose, initially trying it seemed to hold his cigarette out of view.
I fired off two frames, muttered ‘obrigado’ and left, happy with myself for shaking off my usual reticence and actually asking a stranger for a picture. They became two of my favourite pictures that I’d ever taken.

Fast forward to last month and we’re looking at the short list of places that we can fly to from Shannon, our new local airport. Faro was amongst them and so a return trip was booked.
Immediately, I thought it’d be a great idea to print the two pictures that I took of the old fella and take them back to him.
This time we were staying in Albufeira, a few miles away, but I had a hire car and took a trip into Faro. I wandered the streets once more before finally turning into the narrow street that I remembered being his. I arrived at his doorway and prospects didn’t look good. The tiny house was shuttered up and a chain and padlock passed through rough holes in the front door. The building next door had been demolished apart from the façade, and noisy building work was going on. In my imagination, the old fellas passing had allowed a property developer to take over the street and start a process of gentrification, further robbing the Algarve of its identity…

I pushed an envelope containing the two prints and a business card under the door and headed off to find a coffee.
An hour or so later, I was ready to leave and thought I’d pass along the street one more time, and maybe shoot a picture or two of how it looked before its apparent imminent demise. As I walked by, I saw the door was open, and as I approached, with my heart beginning to race, I peered into the gloom of the tiny room beyond. It was filled with all sorts of dusty, sun-bleached stuff that looked to have been collected over a lifetime. Even a few feet from the doorway, I could smell the musty stale air inside.

And then, just like the first time, he appeared.

Through a series of mimes and hand-gestures, I confirmed that he had found the envelope and that it was me that had left it there. We shook hands as he thanked me for the pictures, his fingers twisted with arthritis and his nails yellow and long. I was amazed and delighted that he seemed to like his pictures although I have no idea if he had remembered me taking them in the first place.

Then the idea to take another picture stuck me. I waved another camera towards him and repeated my winning line; “Photo? OK?”. Once again, he struck an unsmiling pose and I fired off a couple of frames. 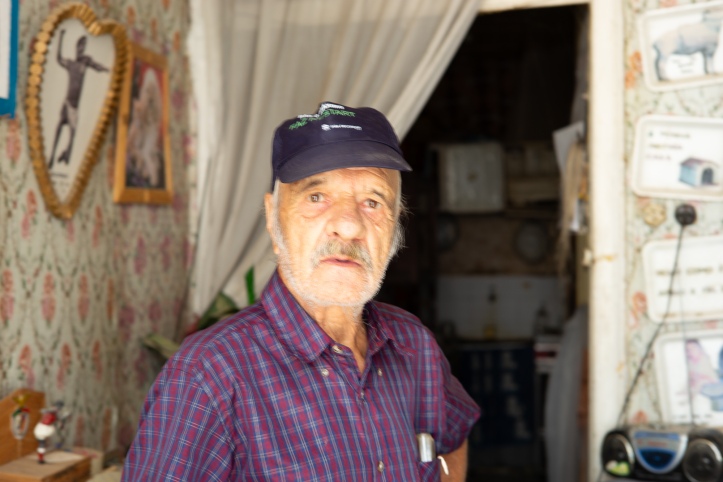 I was panicking and even though I saw in the viewfinder that my shutter speed was 1/15th of a second, I did nothing to correct it and increase the chances of making a decent picture. I knew as soon as the exposure finished that the pictures wouldn’t be sharp and that I’d missed this (almost certainly) once-in-a-lifetime opportunity, and I’ve been kicking myself ever since.

The whole situation reminds me of a book I have called ‘Photographs Not Taken’, an excellent collection of photographers’ essays (edited by Will Steacy) about missed opportunities and the regret that follows.
What’s different in my situation though is that I did have the opportunity and did take a picture, I was just a ‘rabbit in the headlights’ and panicked. Rather than changing the camera’s settings, or asking him to step back into the light outside, I just pressed the shutter.

The whole episode has taught me several valuable lessons, including the very humbling realisation that while I can make very nice pictures, photography still isn’t instinctive, and until it is, I’ll keep missing opportunities…