Two rolls for the price of one in this post (numbers 14 and 15 of the year already) but shot over the course of a couple of days and on a single trip, so I though I’d combine them.

On Monday, my friend Iain spent his first day working with the Amber collective, cataloguing their photographic archive. It meant traveling to Newcastle, a city that he’d told me so much about having been at University there, so I thought I’d tag along. It’s more than three hours to get there and so we decided to go up on Sunday, he’d show me the sights, and then I’d wander the city on Monday while he worked.

As usual before visiting a new city, I referred to two books; Carscapes and Space, Hope and Brutalism. These would give me an itinerary of places to visit and photograph and it was obvious from my initial research that a couple of days wasn’t going to be anywhere near enough.

I packed my new(ish) Yashica-Mat and a mixed bag of film (along with my digital equipment) and set off. The weather wasn’t great when we arrived, so I loaded the TMax. 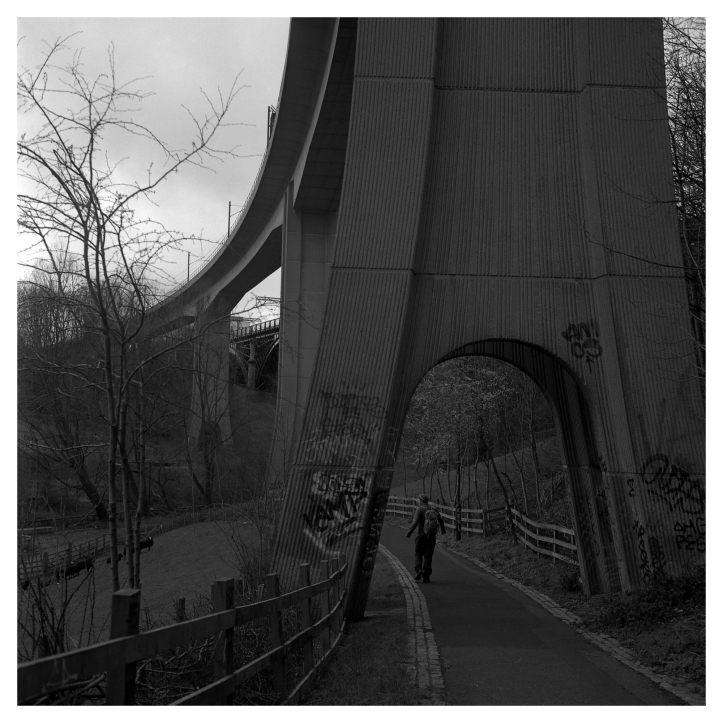 The remarkable Ouseburn Valley is crossed by three bridges. The middle one, known as the Byker Metro Bridge carries two-way Metro trains high above the valley and it’s city-farm. It looks like a 60’s space-age monorail with a smooth, graceful curve high in the sky, rendered in concrete.

Into the city and my first view of the Central Motorway East. It’s a truly bonkers piece of ill-conceived planning that ripped up parts of the historic city (an elevated section was built within 10 feet of a hospital dating from the mid-1800s). Where there wasn’t room, they simply stacked the two carriageways on top of each other (it’s Britain’s only double-decker motorway). It even opened with slip-roads that came onto the motorway from the wrong side – yep, straight into the fast lane! They’ve since closed.

Later on Sunday, we nipped to the coast to see the mighty Tyne river meet the sea (at the imaginatively named Tynemouth). The light was quite strange – a lingering sunset illuminating the clouds out to sea. We wandered around the tired looking seafront and made pictures of the old lido that looked particularly uninviting.

Next morning we were met with beautiful, cold, crisp weather as we headed into town for breakfast. Connecting Newcastle on the north shore and Gateshead on the south are 6 bridges, all with less than a mile of each other. Because the river is in a gorge, four of the bridges are at high level and the most familiar of these, the Tyne Bridge has large buildings built beneath it. It reminded me of the work of people like Berenice Abbott in New York, so I fitted my orange filter and set about ‘paying homage’!

My favourite of the bridges was the ‘High-Level’ bridge, by a certain Robert Stephenson. It carries a railway line stacked over a road and pedestrian walkways, all 130 feet above the river. It’s 5000 tons of heavy-duty wrought-iron. The upper, railway section has to curve sharply at the ends of the span, while the road goes straight on. I visited a couple of times through the day, waiting for the sun to be at an angle to the structure, giving maximum contrast.

With the sun shining, it was time to feed a roll of Acros to the Yashica and carry on exploring. 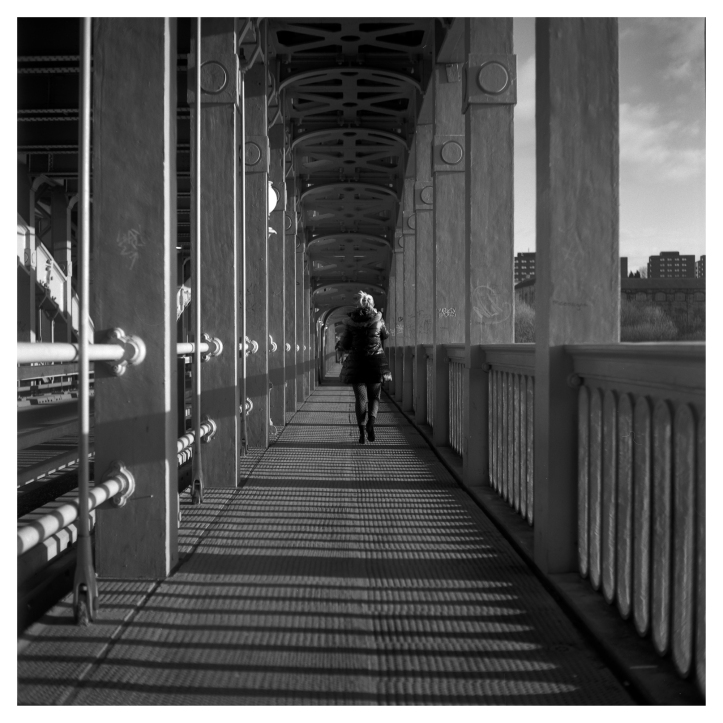 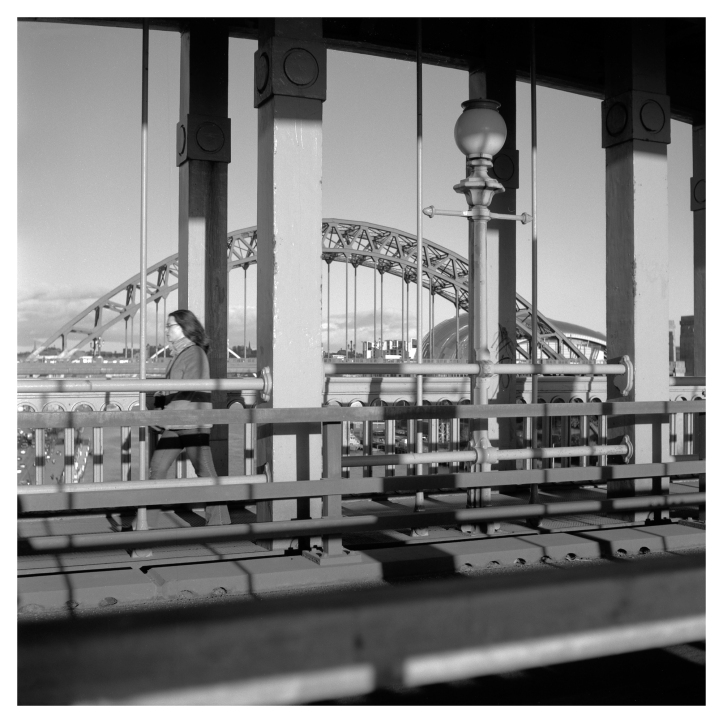 Away from the river, Newcastle has some wonderful buildings, including many from the 60s-70s. The best by a distance is the Civic Centre, which, like many buildings of the time, is covered with interesting, modernist elements and design flourishes. These include the River God Tyne attached to one wall. Apparently, he used to have water flowing down his arm and into a font below. Not on the day I visited. 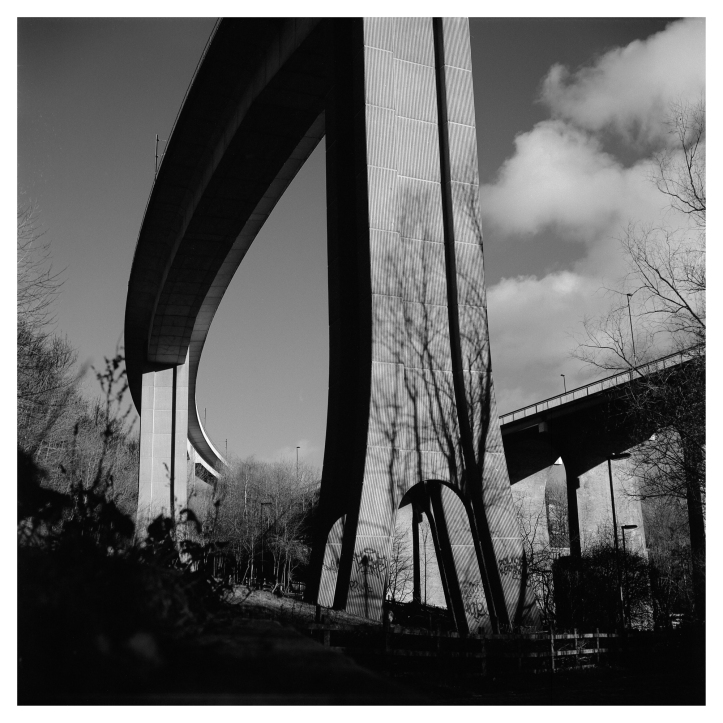 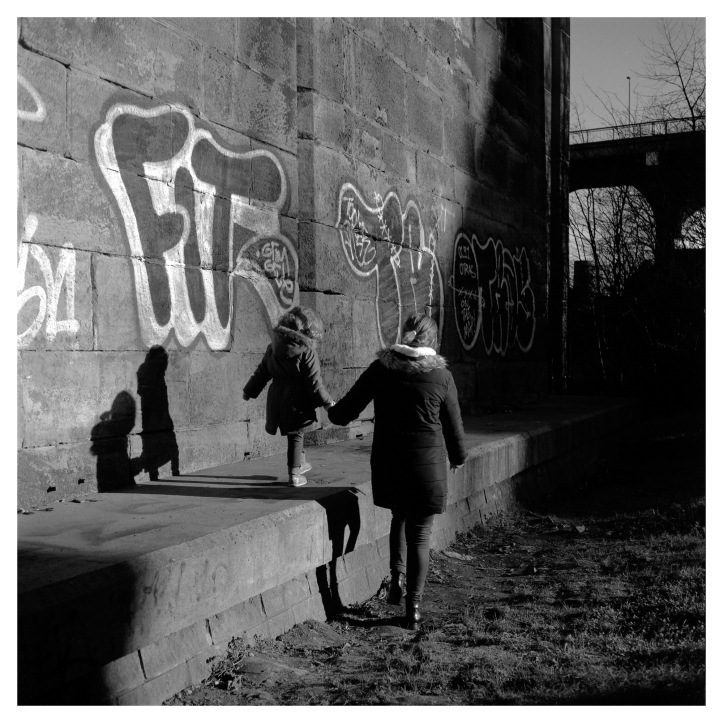 From there, it was back to Ouseburn and that Metro bridge. The sun was beginning to set and, with the help of the orange filter once more, was illuminating the curve of the concrete perfectly. At first sight, the space below the bridges looks like somewhere that you wouldn’t want to dwell, particularly when carrying camera equipment. Having spent a little time there however, soothed by the bleating, mooing and quacking from the farm, I realised that it was in fact a peaceful and well-used urban space, appreciated by not only ‘concrete fetishists’ like me.

Despite walking almost 15 miles on my whistle-stop tour of the place, I’ve barely scratched the surface of all there is to see in the city. Add in Gateshead and surrounding towns and it really is a region that’s worth a visit – I’ll be back.

All pictures were taken by a Yashica-Mat 124G with a broken meter, generally using a middle-yellow filter. The first 7 were on Kodak TMax 400, the rest are Neopantastic Fuji Acros. I processed them at home for 6 and 6:30 minutes respectively in Ilford Ilfotec HC at 1:31. Scanned by me (I still don’t enjoy it, although I’m getting happier with the results) before being cropped and having the levels tweaked in Lightroom.

As usual, the Neopan is great. Lots of contrast and detail where it should be. The TMax is OK – I like the grain on a couple of the pictures, but dislike the greyness of the first couple of pictures here. In its defence, it was pretty overcast and most films would have struggled. I continue to be delighted with the Yashica!